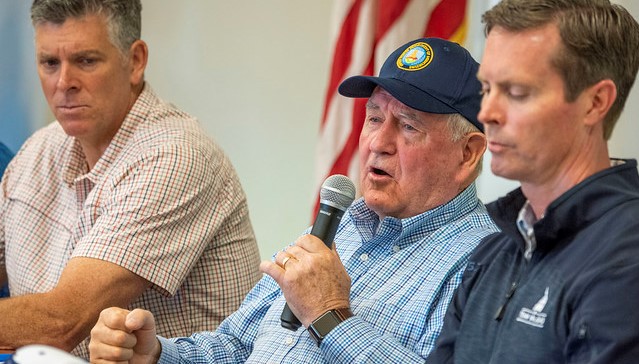 Speaking to farmers and agribusiness leaders in Decatur, Perdue declined to say what actions Trump plans but said the president thought the waivers were “way overdone.”

U.S. farmers have been suffering from wet spring weather and Trump’s escalating trade war with China. Corn producers were heartened earlier this summer when Trump announced he would allow year-round sales of a 15% blend of ethanol in motor fuel, up from the more-common 10% blend, ending a summertime ban on sales of the 15% fuel because of smog concerns.

But Trump’s Environmental Protection Agency, led by Andrew Wheeler, granted waivers to 31 oil refineries for blending 1.4 billion gallons (5.3 billion liters) of ethanol and biodiesel into their fuel. Corn and soybean farmers contend the move wipes out the benefit of the higher ethanol blend.

Perdue, speaking at a town hall before visiting the Farm Progress Show, called it “very disappointing.”

“Administrator Wheeler took some comments from the president over a particular refinery and kind of ran through the hole like a running back and issued these and president understood that was way overdone,” Perdue said. “And we’re meeting furiously to try to recover some of that demand destruction that the small refinery waivers did.”

Mark Marquis, CEO of Marquis Energy, which has ethanol plants in Hennepin, Illinois and Necedah, Wisconsin, said the biggest problem is that the program historically has required that the ethanol not produced because of waivers — in this case, 1.4 billion gallons — be reallocated to larger refineries, so that the total amount of ethanol produced remains steady. That’s not happening with the recent waivers, Marquis said.

But those will not “correct the problem and keep agriculture squarely behind the president where I think he needs them to be re-elected,” Marquis told Perdue. “We need those gallons that are waived to be reallocated to the large refiners.”

The importance of waterways to U.S. agriculture