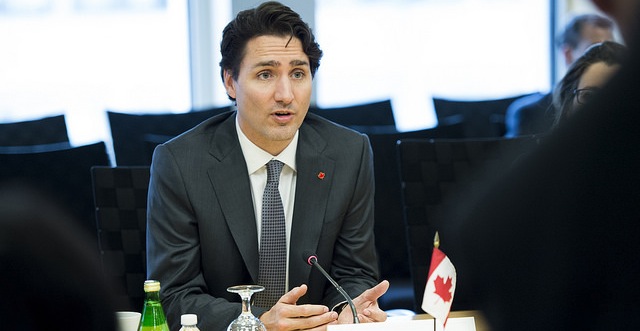 The National Milk Producers Federation (NMPF), the U.S. Dairy Export Council (USDEC), the International Dairy Foods Association (IDFA) and the National Association of State Departments of Agriculture (NASDA) are calling the issue “one of the most sensitive and urgent topics complicating the relationship between the two countries.” The White House hosted Trudeau in Washington to discuss matters related to trade policy and the renegotiation of NAFTA, among other issues. According to the four groups, the two leaders need to devote time to addressing an imminent change in Canada’s milk pricing policy that would further antagonize industry relations between the United States and Canada.

The pricing scheme, already implemented in Ontario last year and slated to be used by Canada’s other provinces this year, is expressly intended to slash milk imports from the United States. The policy will also enable Canada to sell dairy ingredients below cost in international markets, in effect dumping the product at below cost in competition with U.S. dairy exports. The Ontario program has already cost U.S. companies $150 million in exports, thereby harming the American dairy farmers, dairy plant employees and rural communities that depend on the benefits of those foreign sales.

Implementation of this pricing measure “comes at a time when compliance with the letter and spirit of trade agreements is of paramount importance, both here in Washington and around the world,” said NMPF President and CEO Jim Mulhern. “Despite this, Canada still wants to move ahead with a policy that clearly violates its trade agreements with our country. We hope President Trump will remind Prime Minister Trudeau how important it is that Canada honor its commitments.”

The importance of U.S.-Canada trade issues was also raised last week in a meeting between House Speaker Paul Ryan and Canadian Foreign Minister Chrystia Freeland.  Ryan said after their meeting Tuesday that dairy market access is a key issue the two nations must improve upon.

Tom Vilsack, president and CEO of USDEC, said, “American dairy producers and processors want a fair and level trade relationship, and have deep concerns about proposed changes to the Canadian supply-side management system, which are designed, in part, to discourage U.S. exports.”

Michael Dykes, D.V.M., president and CEO of IDFA, noted, “Canada’s intentional and continued flouting of its trade obligations effectively blocks imports of U.S. ultra-filtered milk. What’s more, existing Canadian tariffs that range from 200 percent to more than 300 percent on other U.S. dairy products are unacceptable. Exports are vitally important to the health of the U.S. economy, especially in the rural heartland of our country, and we urge President Trump to stress the importance of market access for U.S. dairy products during his meeting with Prime Minister Trudeau.”

The organizations believe that this meeting between President Trump and Prime Minister Trudeau offers an ideal opportunity for the dairy pricing policy to be on the table during their discussion.

“The states are deeply troubled by recent actions taken in Canada, at the provincial and national level, which raise serious concerns about Canada’s compliance with international trade obligations,” said NASDA CEO Dr. Barbara P. Glenn. “We encourage President Trump to make this a top priority for his administration and we urge Prime Minister Trudeau to ensure Canada meets its obligations.”

Holding Canada to its dairy trade agreements has remained a strong focus for NMPF, USDEC and IDFA over the last year. Last week, a group of 17 dairy companies representing dairy farmers and processors from all over the United States asked governors in 25 states to urge Canadian policymakers to halt the national implementation of the milk pricing system. NMPF, USDEC, IDFA and NASDA also raised the matter with Trump last month before he assumed office.

The National Milk Producers Federation, based in Arlington, VA, develops and carries out policies that advance the wellbeing of dairy producers and the cooperatives they own. The members of NMPF’s cooperatives produce the majority of the U.S. milk supply, making NMPF the voice of dairy producers on Capitol Hill and with government agencies. Visit www.nmpf.org for more information.

About IDFA
The International Dairy Foods Association (IDFA), Washington, D.C., represents the nation’s dairy manufacturing and marketing industries and their suppliers, with a membership of nearly 525 companies within a $125-billion a year industry. IDFA is composed of three constituent organizations: the Milk Industry Foundation (MIF), the National Cheese Institute (NCI) and the International Ice Cream Association (IICA). IDFA’s nearly 200 dairy processing members run more than 600 plant operations, and range from large multi-national organizations to single-plant companies. Together they represent more than 85 percent of the milk, cultured products, cheese, ice cream and frozen desserts produced and marketed in the United States. IDFA can be found online at www.idfa.org.

What kind of cherry did Washington fell?