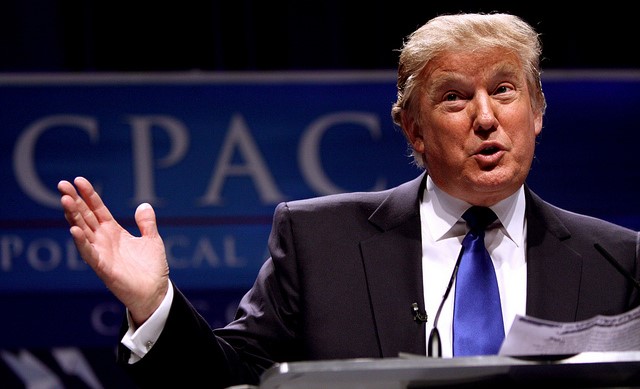 The EPA said it would remove barriers to the sale of E15, a higher blend of ethanol that because of Trump's support now can be sold year-round. (Gage Skidmore, Flickr/Creative Commons)

DES MOINES, Iowa (AP) — The Trump administration announced Friday it plans to implement new rules that will increase demand for ethanol, reversing a decline caused by exemptions given to oil refineries.

The proposal follows months of complaints by Midwest farmers, politicians and the ethanol industry that the federal government’s granting of waivers to refiners had violated federal law and forced some ethanol plants to close.

Roughly 40 percent of U.S. corn is used to produce ethanol, so declining demand for the fuel additive can depress prices for the grain. The issue carries extra political weight because the ethanol industry is concentrated in Iowa, Nebraska and other Midwest states, where farmers have been among President Donald Trump’s most loyal supporters.

Although the proposal by the Environmental Protection Agency and Department of Agriculture wouldn’t address the current loss of ethanol demand, it would ensure that beginning in 2020 the government would comply with a 15-billion-gallon standard already required under federal law and meet benchmarks for soybean-based biofuels. The EPA also said it would remove barriers to the sale of E15, a higher blend of ethanol that because of Trump’s support now can be sold year-round.

The EPA said it will seek comments on its plan in the coming weeks and expects to take final action later this year.

Harold Wolle, who grows corn and soybean in south-central Minnesota, said he welcomed the agreement but said the Trump administration was simply agreeing to comply with federal law.

“I’m please by their willingness to abide by the law,” said Wolle, who farms near St. James, Minnesota. “It’s good news but they aren’t going out of their way to do anything for agriculture or the ethanol industry.”

The deal should mean farmers will have one less issue to deal with, said Wolle, but they still face the prospect of a late harvest due to historically wet weather and poor prices because of trade disputes.

U.S. Sen. Chuck Grassley of Iowa, who during the summer said farmers had been “screwed” by the EPA, issued a statement Monday that praised the president and emphasized the important of ethanol to agriculture and the rural economy.

The Iowa Renewable Fuels Association also thanked Trump for “listening to their concerns and calls for the Renewable Fuel Standard to be enforced according to the law.”

The American Petroleum Institute and American Fuel & Petrochemical Manufacturers said in a statement, “We are deeply concerned about the administration’s decision to, once again, play politics with our fuel system by increasing an already onerous biofuel mandate, placing greater strain on the U.S. manufacturers he promised to protect and threatening higher costs for consumers.”

Although the refinery waivers have been blamed for spurring the closure of several ethanol plants, Iowa State University economist Dave Swenson said the industry still may struggle because demand for the fuel in the last few years hasn’t kept pace with the increased supply.

“The industry has been in trouble for a relatively long time,” Swenson said.

Tens of thousands of goats munch island into crisis