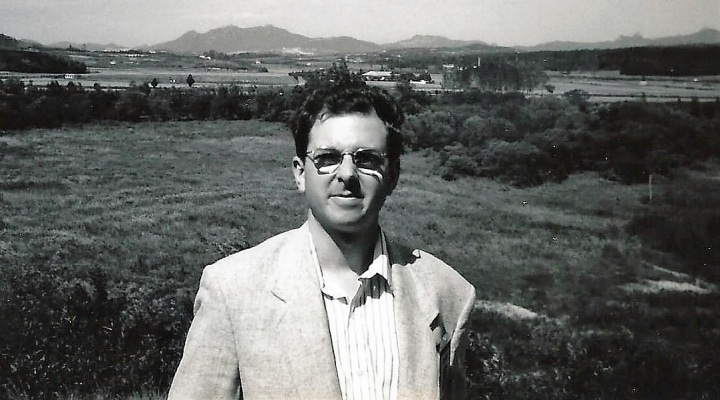 Hoosier Ag Today and Michigan Ag Today farm radio networks are pleased to announce their founder is being honored by his peers with their award for those reaching the pinnacle of farm broadcasting. Gary Truitt was selected for November induction into the National Association of Farm Broadcasting’s Hall of Fame. He is pictured here at the DMZ in South Korea. (Courtesy Photo)

ZIONSVILLE, Ind. — Hoosier Ag Today and Michigan Ag Today farm radio networks are pleased to announce our founder is being honored by his peers with their award for those reaching the pinnacle of farm broadcasting. Gary Truitt was selected for November induction into the National Association of Farm Broadcasting’s Hall of Fame.

Gary started in farm broadcasting in 1981. Four years later he came to Indiana to start a brand-new farm network that soon dominated the Indiana radio landscape with its farm news, market and weather reports. That was the first of two networks he started from scratch. And that’s no small task. It took tireless planning, determination, and effort to make it happen, much like what it takes an Indiana farmer to get a crop planted and through to harvest.

“He is able to see things and think about things that a lot of us are so busy or don’t really think about and he through his writing or through his broadcasting has sparked ideas of many of us through the years of things we need to think about, we need to discuss or we need to make some hard decisions on,” says Indiana farmer and former Farm Bureau president Don Villwock. “He is a unique individual in that respect, and with not a large ag background I understand, he maybe brought a fresh perspective to look at things.”

In 2006 Truitt started the second build of a farm network after a corporate sale of the first one. This time the new Hoosier Ag Today would be his. He reached out to Villwock and others for support, presenting his plan for a statewide agriculture multimedia outlet to serve farmers with the important information they need each day.

Knowing farmers’ thirst for farm programming, Villwock signed on. But, he knew there was another audience they could reach with support of Truitt at HAT.

“We all know those networks aren’t just for farmers themselves,” he explained. “It’s for Indiana residents to consume and he was able to get on the air. Farm Bureau wanted to reach out at that time to reach our urban friends and neighbors in a stronger and better way as they needed educated about what we’re about in agriculture. We knew it was a big mountain to climb and we really appreciated Gary stepping up ready to reinvigorate rural radio networks that were failing or had dropped off the scene. Gary put together a business plan that was impressive and had a timeline to develop it.”

So, Don, a good investment to get behind Gary Truitt?

“We thought we could help him get a little kickstart to that, and it was probably one of the best investments Indiana Farm Bureau has ever made.”

Gary’s wife Kathleen has been a part of his farm broadcasting ventures. She is currently the business manager for both the Indiana and Michigan networks. Their children Anne, Jon, and Nate have also contributed in various ways through the years.

Gary, from all of us who work with you, congratulations for recognition you richly deserve. It is a privilege to be a part of what you created to serve Hoosier farmers.

The National Association of Farm Broadcasting has announced that Gary Truitt, founder of Hoosier Ag Today, will be inducted into its Hall of Fame. This annual tradition represents the highest level of recognition by the 76-year-old organization. Truitt will join 77 other farm broadcasters from years past in being so honored during the Association’s annual meeting in November.

Truitt, president of Hoosier Ag Today and Michigan Ag Today, began his farm broadcasting career in 1981 with the Brownfield Network. “I had no idea what I was getting into when I began in farm broadcasting,” he stated. “Within the year, I was hooked and loved it. Serving farm families with information is as exciting for me today as it was 40 years ago.”

Truitt said many people have helped him along the way, “I came into this business knowing nothing about agriculture. Derry Brownfield taught me the livestock markets; Gary Wilhelmi taught me the grain futures market. Ken Root and John Ochs taught me the farm news business. Farmers taught me about farm life.”

Truitt came to Indiana in 1985 to form the Agri Business Network, later to become AgriAmerica. Over the next two decades the network became the largest network in the state and the dominant source for agricultural information for Indiana farmers. After AgriAmerica was sold, Truitt and his wife Kathleen started Hoosier Ag Today in 2006.

“HAT grew rapidly. Many of the old AgriAmerica stations were eager to have my voice back on the air,” said Truitt. “Within 2 years, we were a financial success and expanded staff with Andy Eubank joining the team. Over the next 10 years, we continued to grow and again claimed the No. 1 ranking in farm listenership in Indiana. We also launched several new digital platforms as internet and social media platforms developed.” Today the HAT team also includes Eric Pfeiffer, Ashley Davenport, meteorologist Ryan Martin, and salesperson Kim Stockment. The company recently purchased the Michigan Ag Today network and, in partnership with Farm World Newspaper, the Indiana Farm Equipment and Technology Expo.

Over the years, Truitt has received many top industry awards including two Farm Broadcaster of the Year Awards, Oscar in Agriculture awards, and the Beyond the Fence award presented by Beck’s Hybrids and the Indiana Soybean Alliance.

“Looking back, I never saw farm broadcasting in my future; today, I cannot imagine my life without it,” reflected Truitt. “It has challenged me, rewarded me, frustrated me, and exhausted me more than I ever thought possible. I have worked with and worked for some amazingly talented individuals. The farmers and farm broadcasters of America have touched and changed my life in many ways. I hope that, in some small way, I have had a positive influence of theirs as well.”