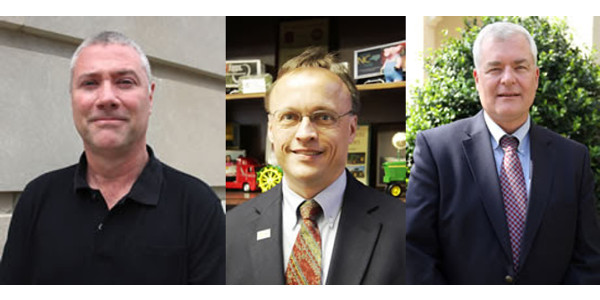 “I am pleased to have well-qualified and dedicated staff members who will be stepping into new leadership roles at the department,” Troxler said. “I am confident they will do an outstanding job based on their years of experience in their respective fields.”

John Howard of Efland has worked 18 years with the N.C. Forest Service, most recently as a district forester with supervisory responsibilities for 27 employees. He is an incident commander on the N.C. Forest Service Incident Management Team. Howard has been dispatched on numerous disasters around the United States, including wildfires, hurricanes and floods. In those responses, he has worked with the Federal Emergency Management Agency and other state and federal organizations, giving him a strong background in emergency response protocols and order. Howard earned a Bachelor of Science degree in forestry from N.C. State University. He will replace Sharron Stewart, who is retiring May 1.

Vernon Cox of Raleigh will leave his post as head of the Plant Industry Division to serve as director of Soil and Water Conservation. The move marks the Columbus County native’s return to the agency where he served for 15 years when it was part of the Department of Environment and Natural Resources. Cox first joined Soil and Water Conservation in 1995 as an economist working on the Small Watershed Grant Program. He was promoted to chief of the division’s Technical Services Section in 2005, before becoming an NCDA&CS environmental policy specialist in 2010. He was promoted to director of the Plant Industry Division in 2013. Cox earned undergraduate degrees in agricultural business management and agricultural engineering technology from NCSU. He also earned a master’s degree from NCSU in agricultural economics. Cox will replace Pat Harris, who is also retiring May 1.

Phillip Wilson of Pikeville has worked for 32 years with the Plant Industry Division, most recently as plant pest administrator overseeing the division’s Plant Protection Section, with responsibilities for regulatory survey and control activities of harmful insects, pathogens and weeds. Wilson began his career as a research technician, before serving for 25 years as a plant pest specialist and field certification specialist. He is a member of the Southern and National Plant boards, and is the vice president/treasurer of the Gypsy Moth Slow the Spread Foundation. Wilson earned a Bachelor of Science degree in botany from NCSU.