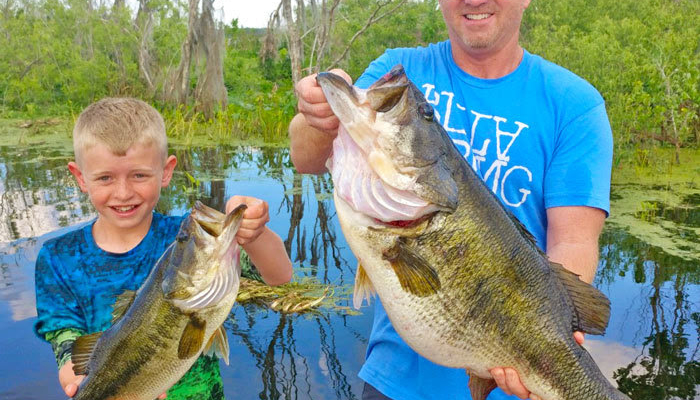 The Florida Fish and Wildlife Conservation Commission’s (FWC) TrophyCatch program celebrates its second-heaviest fish ever approved in the program, a 15 pound, 13 ounce Hall of Fame largemouth bass caught and released in Orange Lake by Brian Hammett.

After producing a large number of trophy bass in 2010 and 2011, Orange Lake went almost dry in the winter of 2011. Following several years of sustained high water, coupled with FWC staff working with local stakeholders to manage the lake, habitat on Orange Lake is once again very good and the fishery has bounced back. Not only has crappie and panfish fishing been very good, but anglers are catching bass again, including trophy bass like Hammett’s Hall of Fame catch, as well as nine other TrophyCatch bass weighing at least 8 pounds that were approved in the program since January. Six of the 10 TrophyCatch-approved 2019 Orange Lake bass weighed more than 10 pounds.

FWC staff worked with stakeholders to write the Orange Lake Habitat Management Plan in 2015-2016 and continue to manage the lake’s habitat according to the plan. Management activities are discussed at public meetings twice a year, and have included vegetation shredding, tussock harvesting and invasive plant control. These management activities not only enhance habitat for fish but also for other species such as wading birds. In addition to habitat enhancement projects FWC staff also continue to monitor the fish populations through fish sampling, creel surveys (angler interviews) and research projects, such as tagging studies.

TrophyCatch is a partnership between the FWC, anglers and fishing industry leaders, such as Bass Pro Shops, that rewards the catch, documentation and release of largemouth bass weighing 8 pounds or heavier in Florida. In order to be eligible for prizes, anglers are required to submit photos or videos showing the entire fish and its weight on a scale to TrophyCatch.com before releasing it back into the water. FWC biologists use TrophyCatch data for bass research, to make informed decisions about the management of Florida bass fisheries and to promote the catch and release of trophy bass. In the past six seasons, TrophyCatch has awarded prizes for the catch and release of more than 8,000 largemouth bass weighing at least 8 pounds. For more information about the TrophyCatch program, email Amber Nabors at Amber.Nabors@MyFWC.com.

For more information about the recent and ongoing management through the Orange Creek Basin Interagency Working Group or to view the Orange Lake Habitat Management Plan, visit:OrangeCreekBasin.wordpress.com.