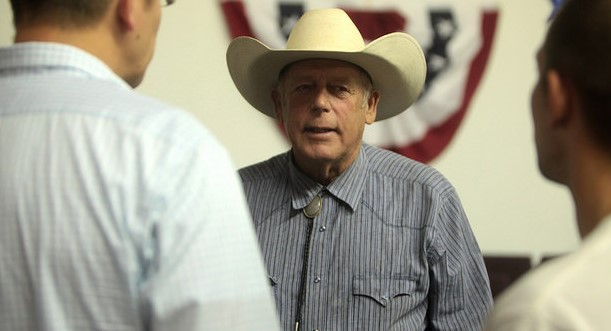 The current trial is expected to take up to 10 weeks and serve as a preview for trial in May for Cliven Bundy (above), sons Ryan and Ammon Bundy and two other accused leaders of the conspiracy. (Gage Skidmore, Flickr/Creative Commons)

Prosecutors are expected to tell the U.S. District Court jury the six men deserve prison for what could amount to the rest of their lives for conspiring with Bundy in what their indictment characterizes as “a massive armed assault against federal law enforcement officers.”

Defense attorneys are expected to cast their clients as law-abiding citizens who protested government heavy-handedness and are now jailed for exercising their constitutional free speech and weapon rights.

The six are the first of 19 defendants arrested and jailed a year ago who will stand trial. Two pleaded guilty to reduced charges. The other 17, including Bundy and four of his sons, have pleaded not guilty.

“They didn’t really care about cattle and Cliven Bundy and grazing fees,” said Jess Marchese, attorney for Eric Parker, who traveled from Idaho to the Bundy ranch with friends and current trial co-defendants Orville Scott Drexler and Steven Stewart.

Also standing trial: Gregory Burleson from Phoenix, Richard Lovelien of Westville, Oklahoma, and Todd Engel of Idaho. Engel is serving as his own lawyer.

Marchese said the men were alarmed by skirmishes involving armed federal agents with dogs and Bundy family members including Cliven Bundy’s 57-year-old sister and two sons. They were protesting after the federal Bureau of Land Management closed a vast range half the size of the state of Delaware to collect Bundy cattle — and set up people corrals well away from the activity designated by agents as safe protest areas.

The mid-day April 12, 2014, standoff was tense. But no shots were fired. Bundy backers held commanding positions bearing military-style AR-15 and AK-47 weapons against heavily-armed federal agents in a dry wash below. Hundreds of unarmed men, women and children were in the possible crossfire.

The government said Bundy owed more than $1.1 million in unpaid grazing fees and penalties and ignored federal court orders to get his cattle off public rangeland near his ranch outside Bunkerville.

The victory of self-styled militia over federal rangers spread like a shock wave across vast rangelands in Western states where the federal government owns most of the land and ranchers chafe at grazing restrictions.

The current trial is expected to take up to 10 weeks and serve as a preview for trial in May for Cliven Bundy, sons Ryan and Ammon Bundy and two other accused leaders of the conspiracy.

Trial for the other six co-defendants is expected in August.