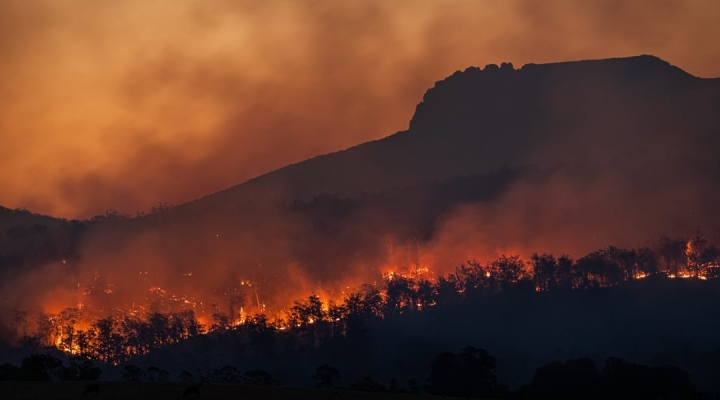 We’re seeing immense wildfires and drought-driven forest die-offs much sooner than anyone had anticipated. When those trees die, that carbon goes back into the atmosphere. (Photo by Matt Palmer on Unsplash)

SALT LAKE CITY, Utah — When people talk about ways to slow climate change, they often mention trees, and for good reason. Forests take up a large amount of the planet-warming carbon dioxide that people put into the atmosphere when they burn fossil fuels. But will trees keep up that pace as global temperatures rise? With companies increasingly investing in forests as offsets, saying it cancels out their continuing greenhouse gas emissions, that’s a multibillion-dollar question.

The results of two studies published in the journals Science and Ecology Letters on May 12, 2022 – one focused on growth, the other on death – raise new questions about how much the world can rely on forests to store increasing amounts of carbon in a warming future. Ecologist William Anderegg, who was involved in both studies, explains why.

What does the new research tell us about trees and their ability to store carbon?

The future of forests is on a knife’s edge, with a tug of war between two very important forces: the benefits trees get from increasing levels of carbon dioxide and the stresses they face from the climate, such as heat, drought, fires, pests and pathogens.

Those climate stresses are increasing a lot faster as the planet warms than scientists had expected. We’re seeing immense wildfires and drought-driven forest die-offs much sooner than anyone had anticipated. When those trees die, that carbon goes back into the atmosphere. We’re also seeing evidence that the benefits trees get from higher levels of carbon dioxide in a warming world may be more limited than people realize.

This tells us it’s probably not a great idea to count on forests for a widespread carbon sink through the 21st century, particularly if societies don’t reduce their emissions.

Trees and forests do all sorts of other amazing things – they clean the air and water, and they provide economic value in terms of timber and tourism and pollination. So, understanding how they will grow matters for many reasons.

There’s an argument that, with more carbon dioxide in the atmosphere, trees will simply grow more and lock that carbon away. What did your study find?

Two key things affect tree growth: photosynthesis, which is how trees turn sunlight and carbon dioxide into food, and the process of cell division and expansion.

There’s been a long-standing debate about which is the biggest driver of tree growth.

A good metaphor here is a cart with two horses. The cart moving down the road is the tree growing, and there are two horses attached, but we don’t know which is actually doing the work of pulling the cart. One horse is photosynthesis. That makes a lot of intuitive sense – it’s where all the carbon comes from for building cells. But we know there’s another horse – in order to grow more wood, trees have to grow layers of cells, and the cells have to expand and divide. That cell growth process is very sensitive to climate changes and tends to shut down when conditions are dry.

People assume that photosynthesis is the dominant process almost everywhere. But we found stronger evidence that these cellular processes that are sensitive to drought actually do more to drive or limit growth.

We used tree ring data from thousands of trees across the U.S. and Europe and measurements of photosynthesis from towers in nearby forests to check whether tree growth and photosynthesis were correlated over time. If they followed the same pattern, increasing or decreasing in the same years, that would have suggested photosynthesis was the horse pulling the cart. Instead, we found no correlation.

That suggests that droughts, rather than the amount of carbon dioxide in the air, may have the biggest impact on how quickly trees grow in the future. We’re already seeing more frequent and severe droughts in many regions.

What did you learn about the risk of tree death in the future?

In the other study, we found that lowering global greenhouse gas emissions could have a huge impact for avoiding damage to forests from wildfires, drought and insects.

We used years of satellite observations, climate data and a network of about 450,000 tree plots across the U.S. where each tree is monitored for climate stress and survival. With that historical data, we built statistical models of the risk U.S. trees face from wildfires, insects and climate stress, primarily related to drought. Then we looked at what might happen under future climate scenarios, with high carbon emissions, medium emissions and low emissions. You can explore the results on an interactive map.

What does this mean for the use of carbon offsets?

Together these studies suggest that the benefits carbon dioxide has for growth won’t be nearly as large as people thought, and the risk of climate stress, particularly wildfire, drought and insects, will be much larger than people anticipate.

That has huge implications for using forests as carbon offsets.

So far, carbon offset protocols and markets have not really grappled with this updated scientific understanding of the risks that forests face from climate change. This tells us that climate policymakers and offset developers need to be very careful about how they count on forest offsets to deliver benefits.

The more hopeful message is that our actions in the next decade matter enormously. If we can rein in the speed of climate change and take a lower-emissions path, that does a huge amount to lower risk and increase the benefits. This isn’t a “throw up our hands and panic” situation – it is our chance to take steps that make sure resilient and sustainable forests last for the future.

What we do with our own emissions and efforts to slow climate change matters immensely for the future of forests.