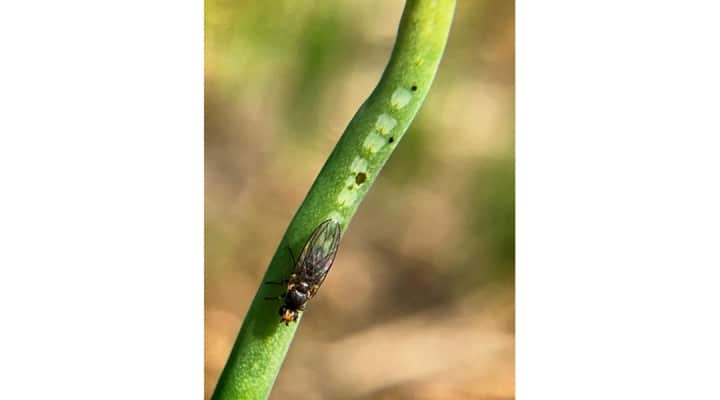 ITHACA, N.Y. — Native to Europe but discovered in Pennsylvania in 2015, the Allium leafminer is a fly whose larvae feed on crops in the Allium genus, including onions, garlic and leeks.

Since its arrival in the U.S., it has spread to New York, Connecticut, Massachusetts, Maryland and New Jersey, and is considered a major agricultural threat. A Cornell University-led team of researchers field-tested 14 active ingredients in insecticides, applied in a variety of methods, to understand the best treatment options.

The researchers’ findings are described in a study, “Managing Allium Leafminer: An Emerging Pest of Allium Crops in North America,” published in the Journal of Economic Entomology.

“Problems with the Allium leafminer tend to be worse on organic farms where highly effective management tools – synthetic insecticides – are not used,” Nault said.

The Allium leafminer (Phytomyza gymnostoma) has two generations annually, with adults emerging in April and again in mid-September. These two cycles are separated by a pause in the summer, when most onions are grown, which allows the crop to escape the pest. Also, onion bulbs expand rapidly, which does not allow the leafminer maggot time to effectively feed.

Crops with green foliage during either adult leafminer generation are most at risk. In the northeastern U.S., these include chives, scallions and garlic in the spring, and scallions and leeks in the fall. Wild alliums, which cross both generations, can be a reservoir where the insects to grow.

Larvae start feeding at the tops of plants and migrate toward the base to pupate. The larvae can destroy vascular tissue, which can lead to bacterial or fungal infections that cause rot.

The research team tested various management strategies with onions, leeks and scallions in Pennsylvania and New York in 2018 and 2019. Spraying chemical insecticides (dinotefuran, cyantraniliprole and spinetoram) was the most consistent and effective method, with up to 89% reduction in damage and up to 95% eradication of the insect. Dinotefuran and cyantraniliprole applied through a drip irrigation technique were not effective.

Though Allium leafminers have not been an issue in onions so far, researchers and farmers are concerned they may become a problem if they gain traction and move west, where onions are a major crop. “This has been a huge concern for the U.S. onion industry,” Nault said.

FAO: Innovation is key to feeding the world
January 24, 2021