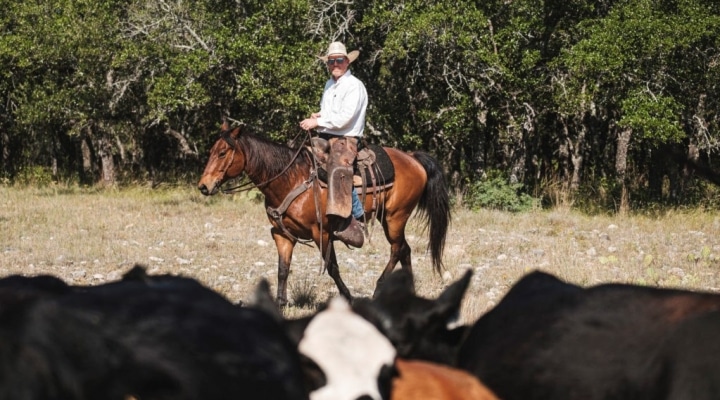 Texas & Southwestern Cattle Raisers Association President Robert E. McKnight said this award is among the highest honors a cattle raiser can receive, and the competition is stiff.

“Across our region and nation, ranchers work tirelessly to care for the natural resources while they care for their cattle,” he said. “They are true stewards of the land, constantly improving management practices to leave their land better than they found it. The Treadwells are a leading example, and I’m honored to present them with this much-deserved designation.”

Treadwell Cattle Co., operated by father-son duo John and Brian Treadwell, is home to a commercial Angus cow-calf and commercial Dorper sheep operation on approximately 5,100 acres along the Edwards Plateau ecoregion of Texas. With an area average of 22 inches of rainfall per year, the Treadwells are experienced in conserving precious and finite resources.

Fire has consistently been the family’s tool of choice to help mitigate the shortcomings of mother nature.

The Treadwells wanted to usher a rich soil profile and broadly healthy soil landscape into the equation, and they agreed with John’s direction for restoration through prescribed fire and replenishing soil nutrients. As root development, vegetative tillering, and grass structure improved, beneficial forbs also added to increased pasture diversity.

“You can want to change your operation,” Brian said, “but if you’re going to convert what God gives you in rainfall into brush control — you’ve got to think differently and look at the whole picture differently.”