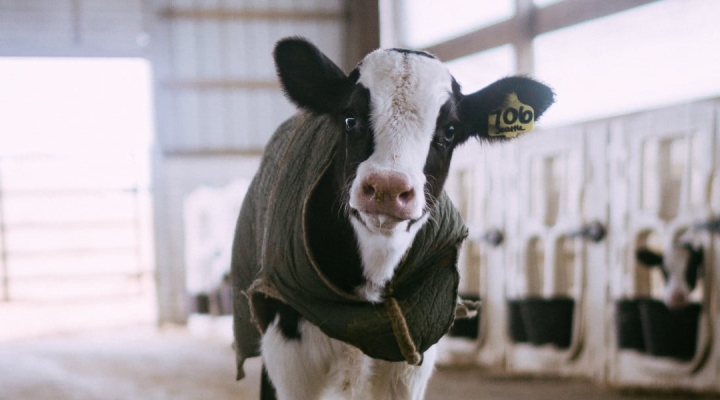 Transition milk, present the first few milkings after colostrum, contains higher levels of nutrients, as well as bioactive components, such as insulin-like growth factor-1, growth hormone, and insulin, not found in milk replacer. (Photo by Amber Kipp on Unsplash)

PHILADELPHIA — Feeding calves transition milk instead of milk replacer in the first days of life stimulates intestinal development and improves health scores. In a new report in the Journal of Dairy Science®, published by FASS Inc. and Elsevier, five researchers from Michigan State University examine the effects of transition milk on the health and growth of Holstein bull calves. They found several benefits, including improved development in all sections of the small intestine and increased weight gain compared with calves fed milk replacer.

Lead researcher, Michael J. VandeHaar, PhD, Department of Animal Science, Michigan State University, noted that some of the increased gut development and growth may be attributed to the greater energy, fat, and protein in transition milk compared with milk replacer. However, VandeHaar continued, “We suggest that these improvements were at least partly caused by the presence of the bioactive compounds found in transition milk. We further speculate that improved intestinal development and health would have carry-over benefits and enhance health and growth for most of the critical first three weeks in the life of a calf.”

Transition milk, present the first few milkings after colostrum, contains higher levels of nutrients, as well as bioactive components, such as insulin-like growth factor-1, growth hormone, and insulin, not found in milk replacer. The gastrointestinal tract of a calf is relatively mature at birth, but hormones and growth factors within colostrum stimulate growth of the gastrointestinal tract and regeneration after inflammatory damage, as found in previous studies. This study specifically tests the effects of transition milk in the first four days of life following colostrum feeding in newborn Holstein bull calves.

Feeding transition milk instead of milk replacer doubled villus length and width, as well as mucosa thickness in the duodenum, proximal jejunum, middle jejunum, and ileum. Transition milk also tended to increase the number of T cells within the epithelial layer of the ileum.

These data support the recommendation that transition milk should be fed on the second and third days of a calf’s life. The authors concluded that feeding transition milk for four days following an initial feeding of colostrum stimulates villus, mucosal, and submucosal development in all sections of the small intestine in the first few days of life and improves health and growth.