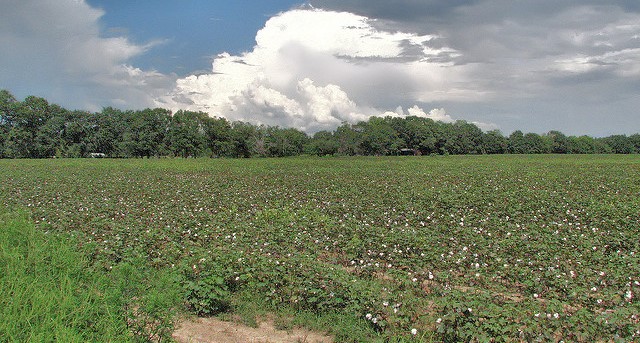 Here is the Lindsays' vision for their 6,000 acres appraised at $19 million: a thoughtful residential and agricultural development, with clustered homes to make the most of conserving land; trails and preserved space for agriculture; and an urban base with space for schools, parks, light industrial and office space so residents could "work where they live and play." (Melissa Johnson, Flickr/Creative Commons)

PARRISH, Fla. (AP) — On a swath of farmland just three miles south of the Hillsborough-Manatee county line, the ground lays in wait. Agriculture equipment stands by to prepare for the crop of potatoes to be planted early next year; for now, migrant workers pluck green tomatoes from stems to put on the trucks passing by on dirt roads every 10 minutes.

But the owners of L3 Farms, 22015 State Road 62, are looking toward a vastly different future. Their citrus crops have been hit with the deadly greening disease, and the landowners, brothers Bob and David Lindsay, are getting older.

They have a fresh idea to combat the infectious, sprawling pattern of development spreading through Manatee County: a “compact, agriculturally oriented rural community.”

Here is the Lindsays’ vision for their 6,000 acres appraised at $19 million: a thoughtful residential and agricultural development, with clustered homes to make the most of conserving land; trails and preserved space for agriculture; and an urban base with space for schools, parks, light industrial and office space so residents could “work where they live and play.”

But it will require “minor” amendments to the county’s comprehensive plan, said Mark Barnebey, an attorney with Blalock Walters who is representing L3 Partnership, for approval to allow a rural village larger than 5,000 acres. It’s the first step in a long process for what could be the first of its kind for Manatee County.

“We do not want to see this laid-out sprawl,” Barnebey said. “We don’t think that necessarily works, and we think the village center concept is much more appropriate for that area and for a parcel this size.”

Since the proposal is in its infancy, there aren’t any designs save for a map showing the potential zoning outline. But the brothers know one thing they don’t want the land to become: a 1,000-lot development invading and erasing the farming heritage of Parrish.

“This is not a gated community, or kind of golf course community,” said Ricki Lindsay, Bob’s wife. “This is not your father’s Oldsmobile.”

The inspiration for Gamble Creek Village, Barnebey said, comes from a mix of Deseret Ranch, a collection of ranches in Osceola County, and Serenbe, a 1,000-acre community southwest of Atlanta that The New York Times called “a utopian experiment in New Urbanism.”

Walking the streets of Serenbe, for example — well, at least through Street View on Google Maps — sidewalks take digital pedestrians through lines of townhomes, Western-looking storefronts and intricately designed single-family homes. The community also has a playhouse, farm-to-table restaurants and several local businesses all surrounded by splotches of open spaces. Its founder, Steve Nyrgren, also expressed a similar fear in urban sprawl from Atlanta’s core, snatching up 900 acres of land next to his farm.

“We’re a little different than both of those,” Barnebey said. “We try to take the best of both.” Other comparisons are drawn to Babcock Ranch just north of Fort Myers and FishHawk Ranch in Tampa.

Although retired, Robert J. Lombardo, a civil engineer whose work includes Lakewood Ranch Hospital and University Town Center, is aiding in the project.

In initial estimates, the Lindsays expect the land to hold at maximum 7,200 units, with the possibility of their own private sewer system and taking into consideration the county’s future planned thoroughfares. A portion of the land would be held for permanent agricultural land, and they hope to include affordable housing in this development, keeping in mind multi-family units in its 500-acre “neotraditional” area. The entire project, if approved, is expected to take about 30 years to complete.

“You don’t have shopping centers. It’s more of a downtown area,” Barnebey explained, likening it to the city of Celebration (without Disney World, of course). Walkability with interest in protecting wetlands and agricultural areas are also key.

“Why not?” David Lindsay said with a laugh. “Among other things, we’re not as young as we used to be. And we’re at an inflection point as well because we had a fair amount of citrus on this property. It’s all dead — as you know, that industry is going away fast.”

At one point in time, the land was part of a much larger slab, going by the name of Quarter Circle A Ranch, according to L3’s property manager Callon “Buddy” Keen. About twice the size L3 Farms is today, the acreage was a cattle ranch owned by the Colvin family. Gamble Creek and Tyre Creek crisscross the property to join about a mile west of the property line. The land sits in the Gamble Creek watershed, not the Lake Manatee watershed. Just to the north, you can see the Florida Power & Light plant.

IMC Global, which then merged with what is now The Mosaic Company, bought the land to be mined for phosphate, but it was eventually sold to the Lindsays, Keen said. The family has had the property for about 30 years.

Seven farmers currently lease land on L3 Farms, which makes up about 3,000 to 4,000 acres of the entire property. Keen said the farmers employ more than 1,000 people, mostly part time, throughout the year. Keen wouldn’t detail how much the leases were, but the revenue goes to the Lindsays. The land, according to the Manatee County property appraiser’s website, is worth more than $19 million.

What would happen to these farms if the development were to go through? Keen couldn’t say for sure, as he expected it to be a decade before any decision was concrete. Many of the farmers use L3 as additional farmland, he added.

The crops today are tomatoes, cabbage, peppers and sod; soon the fields will be prepped for potatoes, cauliflower, squash and watermelon.

The property manager, speaking with a Southern drawl and a knowledge for all things farming that got him the Florida Farm Bureau’s Volunteer Communicator of the Year, was matter-of-fact when addressing the Sunshine State’s growing population.

He recalled a time when agricultural land was west of Interstate 75, interspersed between schools and homes. The more people came, the more it pushed farms — and now homes — out east. He’s confident that the Lindsays have a solid plan, calling them “stewards of the land.”

Commissioner Priscilla Whisenant Trace, a Parrish resident who represents the northeastern portion of the county, had similar sentiments

“As commissioner of Parrish and District 1, I’m trying my best to have the infrastructure and roads in place,” Trace said.

She added that she’s aware of the proposal but declined to comment, in case it would come before her at the dais.

Coming from a family of farmers, Trace owns a nursery adjacent to the 6,000 acres. As a commissioner, she assured that the board would follow the law when that time came. As an agriculturalist, she said, “I want to try to protect our ag lands, but we also have property rights.”

“It’s a thin line we straddle,” she said.