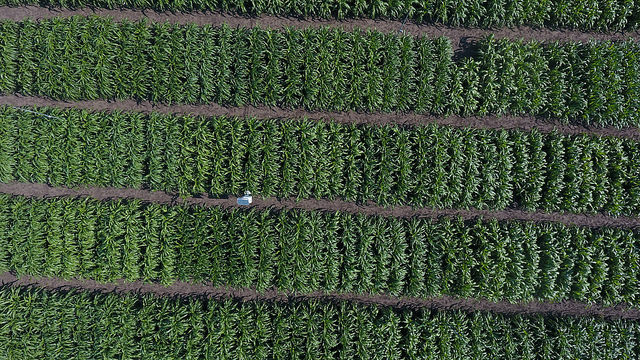 Scientists at ARS’s Natural Product Utilization Research Unit (NPURU) in Oxford, Mississippi, are investigating whether sorghum’s weed-inhibiting properties can be transferred to other crops like rice and used as a bioherbicide. (Claire Benjamin, Flickr/Creative Commons)

The compound sorgoleone, secreted by sorghum, helps the plant combat weeds. It works so well that some other crops struggle to grow in fields where sorghum has been raised, causing problems for growers who want to rotate different crops in those fields.

Scientists at ARS’s Natural Product Utilization Research Unit (NPURU) in Oxford, Mississippi, are investigating whether sorghum’s weed-inhibiting properties can be transferred to other crops like rice and used as a bioherbicide. Producing sorgoleone in other crops would potentially give those plants the ability to fight weeds and reduce reliance on synthetic herbicides, says NPURU molecular biologist Scott Baerson.

Prior to this research, nothing was known about the genes that make sorgoleone, Baerson says. After years of research, the NPURU team, which include Baerson and molecular biologist Zhiqiang Pan, recently reached a milestone that allowed them to transfer the sorgoleone compound into rice. The impact of this research, part of which was recently published in New Phytologist, is twofold, according to Pan and Baerson. The rice plants that produce sorgoleone should require less herbicides to control weeds. At a minimum, the natural compound could reduce the amount of synthetic chemicals sprayed onto food crops. Secondly, growers would spend less on buying and applying chemicals—a major part of their overhead cost.

In addition, a crop that produces its own herbicide potentially would be more efficient—increasing profits for farmers and food processors. Ultimately, these savings could be passed on to consumers, Baerson adds.

In earlier studies, the researchers successfully increased sorgoleone to make sorghum more resistant to weeds, which would help growers who do not rotate sorghum with other crops. They also stopped sorghum plants from producing sorgoleone, which would benefit farmers who want to rotate different crops with sorghum.

The next step is to see if rice plants grown in the laboratory will produce sorgoleone as they grow and have the same weed-fighting ability as sorghum.

ARS has five patents on this technology.