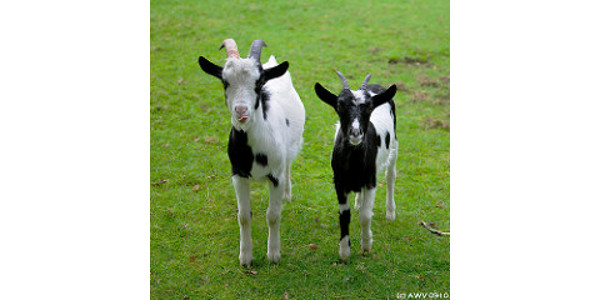 This is the second year the Colorado-based Green Goat LLC has been contracted by RFTA for a weed management alternative that co-owner Donny Benz says is focused on soil health rather than simply destroying an undesirable type of plant. (Arend via Flickr)

GLENWOOD SPRINGS, Colo. (AP) — A crew of 220 goats has returned to the Roaring Fork Valley to help chomp down pesky weeds on the Rio Grande Trail the old-fashioned way — without herbicides and other chemicals.

The goats have been munching on a 4-mile section of the Roaring Fork Transportation Authority right of way south of Glenwood Springs. After they finish there, the goats will be moved to another 4-mile section near Carbondale, working for about 34 days total.

This is the second year the Colorado-based Green Goat LLC has been contracted by RFTA for a weed management alternative that co-owner Donny Benz says is focused on soil health rather than simply destroying an undesirable type of plant.

RFTA started mulling over the goat option early last year, noting that trail users were concerned over herbicides being sprayed on weeds. On a recent Friday, the goats were penned into a hot wire fence enclosure on the east side of the trail by the Colorado 82 and Garfield County Road 154 intersection near Orrison Distributing.

Goats corralled into a plot for controlled grazing offer a natural weed management, and they end up doing a lot more than just removing weeds.

“We’re all about soil heath, not about killing anything,” said Benz.

A goat will eat about 25 percent of its body weigh in a day, according to Green Goat.

About 70 percent of their diet is made up of non-grassy plants, whereas horses and cattle will graze down the grassy stuff, leaving the rougher weeds behind.

The goats go after the thorny, rough stuff, leaving the soft grasses behind, said Benz. The goats selectively put pressure on the weeds and fertilize the soil at the same time, he said.

These goats’ manure provides organic fertilizer, and seeds from those undesirable weeds won’t germinate after having gone through their digestive systems. And they’re lightweight animals with hooves that till and aerate the soil, also working their manure and urine into the ground. While steep embankments are difficult for mowing machinery to reach, goats are good at grazing on those uneven surfaces and getting into nooks and crannies.

Benz noted a ditch running right next to the Rio Grande Trail, saying that it would be illegal to spray chemicals there anyway.
The goat herd is also good at engaging communities and educating people about the practice, drawing curious runners, cyclists and families passing by. That’s in contrast to running by someone on machinery or spraying chemicals that you and your kids run through and then bring home, said Benz.

Green Goat has been operating across the country, pretty much everywhere west of the Mississippi River, for about 22 years now.
Currently the company has herds working in four other Colorado locations and a total of more than 1,000 goats. Green Goat also uses its herd for other types of projects, like fire fuel load mitigation, reseeding projects and erosion control.
___
Information from: Post Independent, http://www.postindependent.com/