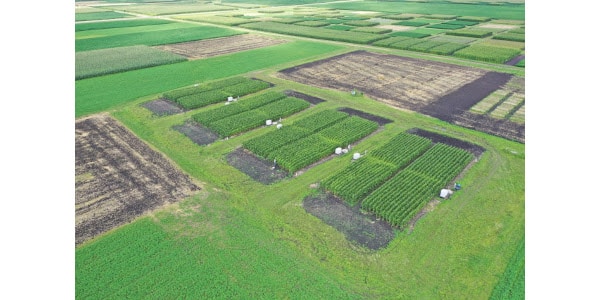 MINNEAPOLIS — Pre-plant urea fertilization is a traditional nitrogen (N) practice in much of Minnesota. Split application and using enhanced efficiency N fertilizer sources, such as ESN that is a polymer coated urea (PCU), are a few of the advanced management practices that have been suggested to improve production and reduce N losses to the environment. But how effective are these advanced practices at reducing N losses and keeping N in the soil available to the crop?

This was the focus of a seven-year study (2014-2020) in southwestern Minnesota that is part of a coordinated multi-state project across the Midwest. The study was supported by the Agricultural Fertilizer Research and Promotion Council (AFREC), the Foundation for Agronomic Research (FFAR), and the Fertilizer Institute (TFI). Before we dive into our findings, let’s review a few fundamental concepts. 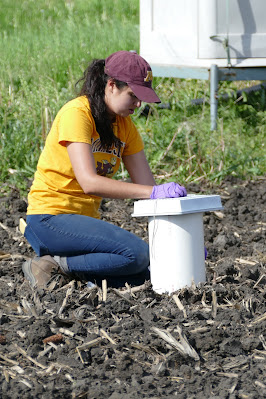 What are the most common pathways of N loss?

Plants take up N from the soil as nitrate (NO3) and ammonium (NH4). When urea is applied, it converts almost immediately to ammonium and then quickly to nitrate. If we could keep N in the ammonium form longer, it could be beneficial because nitrate is easily lost through leaching if rain exceeds the capacity of the soil to store water.

Nitrogen can also be lost to the atmosphere as gas through denitrification. Denitrification happens when soils become saturated with water and N oxides such as nitrous oxide (N2O) or N2 gas are produced. While N2 gas is not a problem for the environment, N oxides are. This is because N oxides are greenhouse gases. Additionally, ammonia (NH3) volatilization occurs when urea fertilizers are surface-applied and not sufficiently incorporated into the soil. This loss of N can be even greater when urea is broadcast without a urease inhibitor. Ammonia volatilization is higher when soils are moist and warm, there is substantial crop residue on the soil surface, and the soil is alkaline (pH greater than 8). Regardless of the loss pathway, once N leaves the field, it is no longer available to the crop.

In our recent study, we evaluated traditional pre-plant urea application against advanced management practices, including split applications and using PCU at pre-plant. We used the same rate of 180 lbs N/ac across the study. Split applications consisted of one-third of the total N rate applied as either pre-plant urea or PCU and two-thirds applied around V6 as urea with a urease inhibitor (Agrotain). We compared their effects on 1) N losses (N2O and NH3 volatilization and NO3 leaching in tile drainage), 2) corn yield, and 3) net economic return. The study was conducted on a continuous corn cropping system in a poorly drained soil in Lamberton, Minnesota. 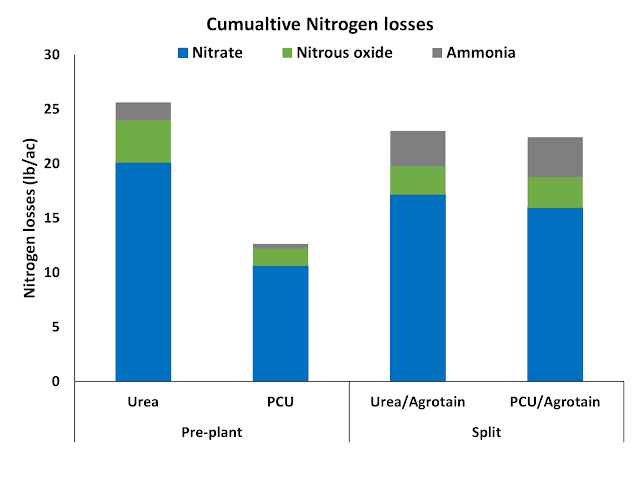 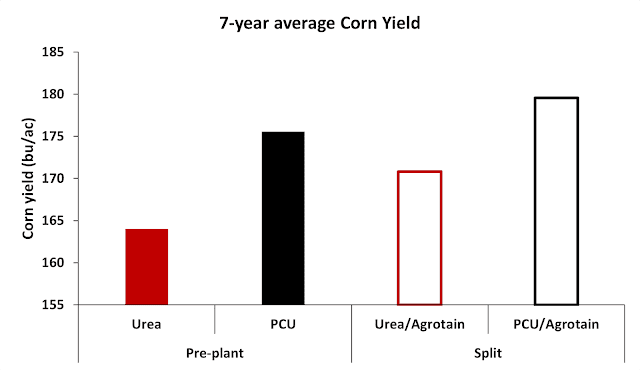 For the net economic return calculations, the following was used:

What should you consider before choosing an N management practice?

Based on what we have learned from this study, we are currently evaluating other practices with an emphasis on various blends of PCU and urea applied at different times to reduce N loss and increase grain yield and net economic return. We are doing this study during two growing seasons at four locations throughout Minnesota. Stay tuned for more as results from the new study start to come in!