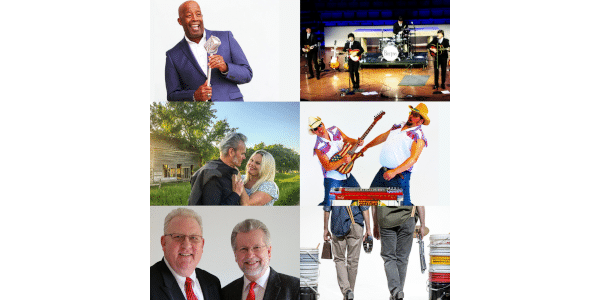 SPENCER, Iowa — The Northwest Bank Stage will feature six different quality acts at the 2021 Clay County Fair powered by SMU, Sept. 11-19. This is just a portion of the $150,000 in free entertainment offered to fairgoers.

A veteran performer and an extremely funny guy, C. Willi Myles will perform Sept. 11-13. A comedian who has the gift of connecting through humor and storytelling, he tells extremely funny non-offensive stories and jokes and gives a unique spin to life’s everyday challenges.

In 1964, America was introduced to a phenomenon that was called The Beatles. Milwaukee’s very own The Britins will recreate the era that influenced so many top groups and artists today on Sept. 11-13. Join The Britins as they play hits from the Fab Four from “Love Me Do” to “Let It Be”.

On Sept. 14-16 prepare to be transported to a treasured golden era of American music with husband-and-wife duo The Floras. You’ll hear wonderful songs, moving stories and history with songs by Johnny and June, Hank Williams Sr., Patsy Cline, The Whites, Loretta Lynn, Buck Owens, The Louvin Brothers, as well as classic hymns.

Poppa Bear Norton, also performing Sept. 14-16, proclaim themselves to be America’s only, and therefore number one, daredevil country act. They were recently awarded both the 2018 Midwest Country Music Association’s “Songwriter of the Year” and “Maverick” awards and have been described as hilarious hillbilly music and a two-man country music marvel.

Finishing the Fair Sept. 17-19 is The Memories, a cherished music and comedy duo. These guys are true pros. You hear it in their voices and see it with the way they connect with each and every audience they perform for. If you enjoy music and showmanship done right, then you are going to enjoy The Memories.

Joining The Memories the final three days of the Fair, Sept.17-19, is Buckets and Tap Shoes, a tap and percussion duo. They bring a high-energy blend of music, dance, and drumming from the streets of Minneapolis. The multi-talented Ausland brothers, Rick and Andy, take audiences on a rhythmic journey using percussion instruments including tap shoes, found objects, drums, and buckets.

For a complete video highlighting these six acts, click here.

Wetland field day to be held near Coggon on September 29th
September 19, 2021