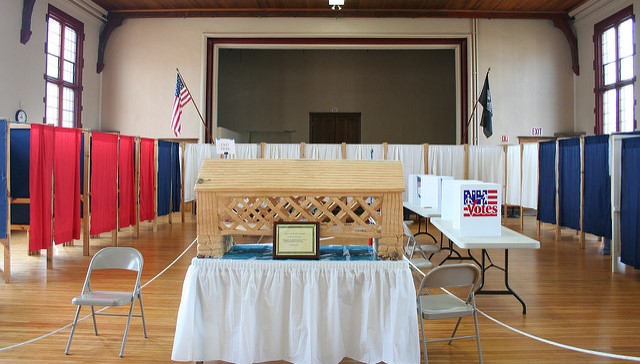 Nationwide, the U.S. Chamber reported that $75 billion in U.S. exports will soon be subject to retaliatory tariffs. Many of the hardest hit states are those that backed Trump and feature top-tier Senate races in November. (Stock image via kelly taylor, Flickr/Creative Commons)

NASHVILLE, Tenn. (AP) — Jimmy Tosh’s sprawling hog farm in rural Tennessee is an unlikely battleground in the fight for control of the U.S. Senate.

Yet his 15,000 acres (6,000 hectares) two hours west of Nashville showcase the practical risks of President Donald Trump’s trade policies and the political threat to red-state Republican Senate candidates such as Tennessee’s Marsha Blackburn.

Tosh, a third-generation farmer who almost always votes Republican, said he’s voting this fall for Blackburn’s Democratic opponent, former Gov. Phil Bredesen, in part because Trump’s trade wars are hurting his family business — a sizable one with some 400 employees and 30,000 pigs. The cost of steel needed for new barns is up, Tosh said, and the expanding pork market stands to suffer under new tariffs.

“This tariff situation has got me very, very, very concerned,” Tosh told The Associated Press. “I just think Bredesen would be better on that situation.” He said Blackburn has shifted “toward the center” on tariffs, “but in my opinion, it’s a little late and not far enough.”

Similar concerns are roiling high-profile Senate contests in Missouri, Indiana, Pennsylvania and North Dakota and forcing GOP candidates to answer for the trade policies of a Republican president they have backed on almost every other major issue.

The Trump administration imposed a 25 percent tax on $34 billion worth of Chinese imports on Friday, and China is retaliating with taxes on an equal amount of U.S. products, including soybeans, electric cars and pork. The administration has penalized steel and aluminum imports from allies such as Canada and Mexico, leading to retaliation against American-made products such as blue jeans, motorcycles and whiskey.

The tension has reshaped the race to replace retiring Sen. Bob Corker, R-Tenn. Blackburn, an eight-term congresswoman, has been one of the president’s biggest boosters for the past two years, yet with the business community up in arms, she’s dramatically softened her support for Trump’s trade policies, at least.

“We fully appreciate that some of these countries have had a trade war against us for years, certainly China would be in that list, and it’s time that somebody really stands up,” Blackburn told AP. “But with that said, it does cause us tremendous concern, just grave concern.”

Still, Blackburn opposed a proposal by Corker that would have given Congress new authority to check the president’s trade moves. She called Corker’s approach “a little bit too broad.”

Instead, Blackburn helped write a letter urging Trump’s commerce secretary to reconsider broad tariffs so as to avoid harm to Tennessee’s economy.

An estimated $1.4 billion in Tennessee exports are threatened by Trump’s trade moves, according to the U.S. Chamber of Commerce, a longtime Republican ally. Those exports are linked to more than 850,000 jobs in the state related to farming, steel, baked goods, car manufacturing, whiskey and more.

Nationwide, the U.S. Chamber reported that $75 billion in U.S. exports will soon be subject to retaliatory tariffs. Many of the hardest hit states are those that backed Trump and feature top-tier Senate races in November.

Indiana, where Republican Senate candidate Mike Braun is trying to defeat Democratic Sen. Joe Donnelly, has more than 812,000 jobs tied to global trade, the Chamber found. In April, Braun said concerns about the tariffs were being “overdramatized.”

Missouri Sen. Claire McCaskill, a Democrat, has pounded her Republican opponent, Josh Hawley, for backing Trump’s trade decisions. Hawley, whose state has more than 826,000 jobs tied to global trade, says the president is right to shake up trade deals and should have time to negotiate.

And in North Dakota, Democratic Sen. Heidi Heitkamp has seized on Republican challenger Kevin Cramer’s description of the tariff fallout as “hysteria.” Cramer blames China for the trade dispute that could affect as many as 111,000 jobs.

But back in Tennessee, Blackburn has been backed into a corner by the state’s business leaders.

Tennessee whiskey maker Jack Daniel’s, for example, sends roughly 60 percent of its business out of the country.

Jack Daniel’s parent company was forced to increase prices across Europe as a result of tariffs imposed by the European Union in response to Trump’s tariffs on U.S. steel and aluminum. Shares of the company dropped sharply last month after Mexico announced plans to impose a 25 percent tariff on whiskey in response to Trump’s moves.

“Tariffs such as these, they can only do harm,” said Jack Daniel’s general manager Larry Combs.

“These tariffs are directly increasing our costs,” she said.

The Democrat in the Senate race, former Gov. Bredesen, has seized on the issue. Even in a state Trump won by 26 points, he’s betting he can use Blackburn’s loyalty to the president against her because of the tariff-related fallout.

“She clearly is very loath to do anything contrary to what the Trump playbook is,” Bredesen said.

“The way I’ve read her expression is, ‘We elected Trump president. I’m here to make sure he gets his agenda passed,'” Bredesen continued. “What I would like to do is say, ‘Look, I’m there to be with the president on stuff that makes sense for Tennessee, to be against him on stuff that is not.’ And that’s true whether it’s a D or an R president.”

Blackburn is eager to change the subject.

She’s quick to highlight her support for the GOP’s tax cuts. And with a sudden Supreme Court vacancy that gives the GOP an opportunity to cement a conservative majority for a generation, she’s emphasizing the importance of having a Republican Senate majority to approve Trump’s judicial appointments.

But back at the hog farm, Tosh is worried about the family business.

“The pork producers in the country are probably being impacted more so than any element of the economy right now,” he said. “We’re probably going to scale back some plans that we had, at least put them on hold.”

Reactions to trade battle between China, the US