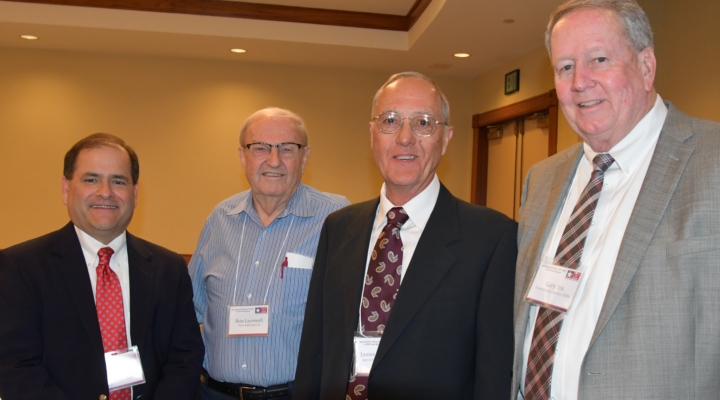 AUSTIN — It’s not as dire as the farm crisis seen in the 1980s, but ongoing trade uncertainty coupled with low commodity prices and rising interest rates has created challenging times for agricultural producers across the U.S. and Texas, according to experts.

A room full of who’s who in Texas agriculture, including farmers and those representing commodity associations, attending the 2019 Texas Ag Forum in Austin heard recurring talk of the importance of agricultural trade with China and the reliance on export shipments of everything from beef to soybeans.

“There’s a layer of uncertainty that’s very real,” said Pat Westhoff, Food and Agricultural Policy Research Institute director at the University of Missouri. “There are more issues with late payments, more borrowing of money other than for operating expenses. It’s not the 1980s, but things are not going in the right direction. Things are not going to come crashing down tomorrow, but it’s not getting any better either.”

“Attendees at this year’s Ag Forum are really interested in the sensitivities of commodity prices to changes in exports, both short and long-term views on trade and outlook for U.S. meats, grains and fibers,” said Dr. Joe Outlaw, Ag Forum secretary and director of the Agricultural and Food Policy Center at Texas A&M University, Texas A&M AgriLife Extension Service economist.

“If you care about rural America, you want farmers and ranchers to perform better in the businesses they support,” Moran said. “I support farmers and ranchers because they determine whether or not my community has a future. Agriculture is one of few places left that sons and daughters work side by side with their moms and dads.”

Regarding trade and exports, Moran said, “if we are not exporting, we are not living.”

Moran encouraged members of Congress to support the United States-Mexico-Canada Agreement “and not to leave us with no agreement.” He also supports key infrastructure in rural communities with access to healthcare. More importantly, Moran said he wants farming families to continue their legacy.

“Every time we lose a son or daughter to the city, a job that has a 401k and insurance plan they don’t tend to come back to rural areas. I’m an optimist, I think things will get better. But when the time comes, will we be able to convince them that it’s better than in Dallas or Houston and get them to come back to the farm?”

Meanwhile, demand for meats such as beef continues to climb at a steady clip, according to economists at the forum.

“Overall, global beef trade is up and overall volume is up,” said Erin Borror, U.S. Meat Export Federation economist in Denver. “Beef exports to China are now double the volume imported from the U.S.”

Beef exports accounted for $8.3 billion last year, a 15 percent increase. Beef export value stands at $323 per head on U.S.-produced cattle. In addition to continued demand for red meat, the China market continues to be lucrative for tongue and hides. With Australia beef production on the decline due to drought, Borror said the U.S. is well positioned to continue to capitalize on export demand of beef.

“The U.S. is well positioned to maintain its supply advantage,” she said.

Borror said global pork trade set a new record this year as strong demand for pork continues throughout the world. African Swine Fever has contributed to a 15 percent drop in production from China and Vietnam, which translates to a seven percent decrease globally. Borror said the U.S. can capitalize on the gap, providing the retaliatory tariffs levied by China are eliminated.

During the program, Outlaw honored Dr. James Richardson, who recently retired as co-director of the Agricultural and Food Policy Center at Texas A&M. Among Richardson’s innovations included FLIPSIM, or Farm Level Income Policy Simulator. The simulation model he developed has been used by Congress to evaluate countless farm bill proposals to determine both the good and bad financial outcomes for U.S. farmers.

The Ag Forum is sponsored by the Agricultural and Food Policy Center and AgriLife Extension. The forum is an association of agricultural leaders and representatives from across the Texas food and fiber system. It provides a forum for discussion of problems and emerging issues in agriculture.