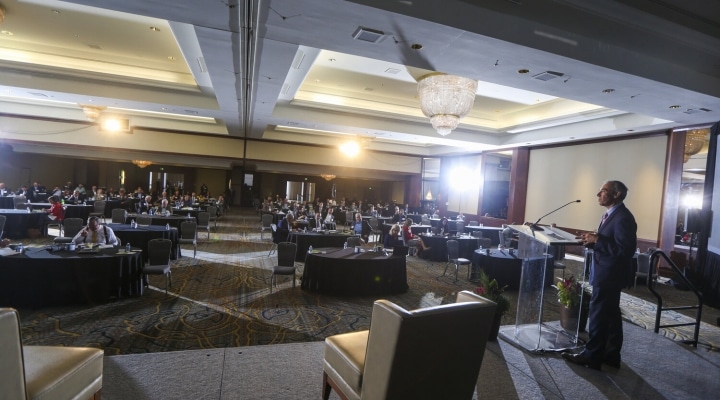 Despite an absence of in-depth media and federal department updates regarding U.S.- China trade negotiations, progress is taking place. Gregg Doud, chief agricultural negotiator at the Office of the United States Trade Representative, said his team and the Chinese “are talking.” (photo by Agricultural Business Council of Kansas City)

KANSAS CITY, Mo. — Despite an absence of in-depth media and federal department updates regarding U.S.- China trade negotiations, progress is taking place. Gregg Doud, chief agricultural negotiator at the Office of the United States Trade Representative, said his team and the Chinese “are talking.” He also said it is possible that China might meet its Phase One trade commitment with the U.S. to purchase at least $36.5 billion in agricultural products by year’s end.

Doud said he is watching the implementation of USMCA, particularly the situation with dairy in Canada. Another important focus will be the biotechnology situation with Mexico. Two key issues included in USMCA deal are the biotechnology component and the enforcement mechanism. Doud emphasized the new enforcement mechanism is something he believes the U.S. will really be able to “utilize in a fashion much more quickly than we had previously been able to use.” He added, “We will not hesitate to use enforcement tools we have in USMCA, if necessary.”

There are challenges for the dairy industry. Vilsack stated, “Canada has already begun implementing USMCA in a way that thwarts its market access promises and prevents U.S. dairy from making full use of the benefits that Congress and the Administration fought so hard to secure. There are also unanswered questions concerning how Mexico will translate its commitments to safeguard common-name cheeses into action. These are unresolved concerns that affect everyday dairy farmers and workers across our industry.”

Quick Recovery
Kansas City Fed’s Esther George provided an optimistic assessment of the U.S. economy. But she had a cautionary message. “The good news is the economic recovery is underway – quicker than I thought.” She credited the rebound to the general resiliency of the U.S. economy, the resolve of the American

spirit and the fiscal stimulus programs. “The diversity of our economy has really come through,” she said. “Our economy is a microcosm of the thousands of industries in the country.” She warned, however, “We’re not out of the woods yet.”

George commented that the Fed has been proactive in addressing a bleak outlook for some community banks. The nation’s banking system is diverse with more than 10,000 banks, several thousand of which are categorized as small. “Policy makers must understand the dynamics of small banks.”

Other Trade Issues
Blake Hurst, president Missouri Farm Bureau, introduced a panel discussion on trade issues saying, “With trade we always have issues.” He sees a change in Americans’ attitude toward trade, and thinks many may consider it not that important to the overall economy.

Panel participant Jim Sutter, CEO, U.S. Soybean Export Council, pointed out that the world relies on the U.S. for soybean supplies. “We use 40% of our crop at home and export 60%.” Sixty percent of those export shipments go to China. Panelist Bill Even, CEO, National Pork Board noted that in 1995, the U.S. was a net importer of pork. “Today, we export 30% of our pork products, and U.S. pork exports support 110,000 jobs American jobs.

Trending On The Farm
USDA Deputy Secretary Steve Censky told the Ag Outlook Forum audience that support for farmers is strong at high levels of all government agencies and departments. But he mentioned the USDA considers another round of Market Facilitation Program payments unnecessary since additional coronavirus relief is coming for producers in the next month or two..

The current interest rate environment is much more favorable than it was a year ago and should cause the farmland market to trend higher. Steve Bruere, President, Peoples Company, suggested there is a “huge demographic shift” in who is buying farm land, and outside capital is pouring in. “As farms get larger you need outside capital.”

USDA Chief Economist Rob Johansson said the new round of coronavirus relief payments will help shore up farm income heading into 2021. He expects about $6 billion in payments from the second round of the Coronavirus Food Assistance Program to reach farmers in the first part of 2021. Johansson forecasts higher revenue next year for livestock producers, but net farm income is expected to be down because of an overall decline in government payments.

Detailed data and stats from Rob Johannsson’s and John Newton’s presentations are available at the USDA Office of the Chief Economist, www.usda.gov/oce and at www.fb.org/marketintel, respectively.