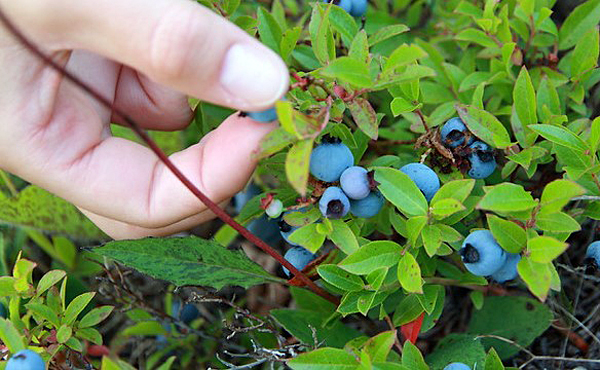 Maine is the sole commercial producer of wild blueberries, which are smaller than cultivated blueberries and are used in a variety of frozen and processed products, in the United States but competes against Canada. (The Tedster, Flickr/Creative Commons)

PORTLAND, Maine (AP) — A federal program designed to help farmers suffering from trade disruptions is unlikely to assist Maine’s wild blueberry growers who are struggling in the face of falling prices, loss of business in China and competition with the Canadian crop.

Maine is the sole commercial producer of wild blueberries, which are smaller than cultivated blueberries and are used in a variety of frozen and processed products, in the United States but competes against Canada. Canada’s weaker dollar puts Maine and its berries at a trade disadvantage, and some growers have started intentionally producing less fruit as a result of poor prices in recent years, Maine Agriculture Commissioner Amanda Beal said in a letter to U.S. Department of Agriculture undersecretary Bill Northey last month.

Beal has called on the USDA to include the crop in its Market Facilitation Program, which is slated to provide billions to growers negatively impacted by foreign trade retaliation.

But the USDA told The Associated Press in an emailed statement that program is intended for crops that aren’t easily used in school food programs or by food banks. Wild blueberries sometimes fill those needs. The statement said the blueberries are still eligible for other USDA assistance programs, such as one that feeds products into federal nutrition programs when there’s an oversupply in the market.

“That route remains a permanent, viable solution for wild blueberry growers in Maine,” the statement said.

Maine farmers collected 50.4 million pounds of the wild fruit in 2018, down more than 17 million pounds from the previous year, according to University of Maine data.

“Faced by economic pressures and reduced prices, many growers have drastically cut back on harvesting their crop within the past two years and will continue to do so this coming crop season,” Beal’s letter said. “Some have left the business altogether — a huge blow to local communities and economies in rural Downeast Maine.”

The state plans to supply the USDA with more data about the subject to make the case that Maine growers deserve assistance, said Jim Britt, a spokesman for the Maine Department of Agriculture, Conservation and Forestry. The state’s congressional delegation is also calling on the USDA to help.

Wild blueberry growers deserve assistance in part because of a drop in exports to China amid trade hostilities between that country and the U.S., said Patricia Kontur, interim director of the Wild Blueberry Commission of Maine, which promotes Maine blueberries. The exports fell from 2 million pounds in 2017 to 75,000 pounds last year, she said.

This story has been corrected to show that farmers collected 50.4 million pounds of blueberries in 2018, not about 57 million pounds, according to updated figures from the University of Maine.