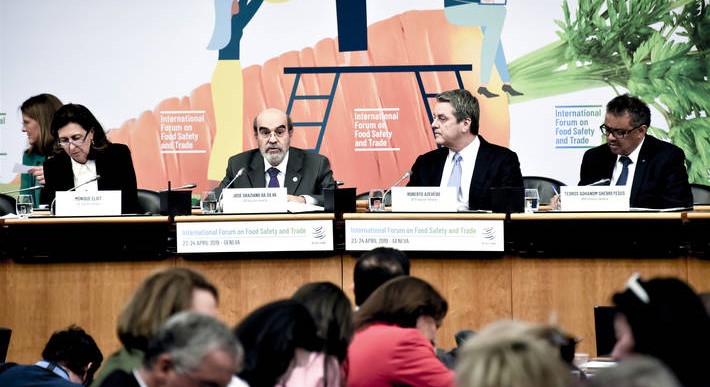 FAO Director-General José Graziano da Silva (second from the left) is speaking at the International Forum on Food Safety and Trade in Geneva today. (FAO)

GENEVA — International trade is a very important tool for tackling hunger but countries must also guarantee that globally traded food is of good quality, safe and healthy, FAO Director-General José Graziano da Silva said at the International Forum on Food Safety and Trade that is held at the World Trade Organization (WTO) in Geneva (23-24 April).

“Many countries depend heavily on food imports to guarantee the availability of food for their people,” Graziano da Silva said. “Unfortunately, unhealthy ultra-processed food fares better in international trade in terms of transportation and conservation than non-processed food”.

He noted that trade in such products has already contributed to a substantial increase in the proportion of obese people in countries that import most of their food, such as the Pacific and Caribbean Islands.

The FAO Director-General called on international community to advance the establishment of trade rules and regulations that encourage the consumption of healthy and nutritious foods.

“Food safety crosses across national borders. Food produced in one country today can, within 24 hours, be on the other side of the planet and on its way to shops, restaurants and homes,” said the Director-General of the World Health Orgnization (WHO) Dr Tedros Adhanom Ghebreyesus. “There is no such thing as food safety for the rich and another for the poor. The health of all people, no matter where they live and what they eat, must be protected equally.”

“Access to safe food is crucial in achieving the Sustainable Development Goals. It is therefore imperative to discuss how food, health and trade policies can align to help deliver these shared goals,” said WTO Director-General Roberto Azevêdo. “I am pleased that we have the opportunity to place a spotlight on this issue at today’s event here at the WTO…. We must consider how to take advantage of the opportunities brought by technological progress in upholding our goals of food safety and public health. We have to be prepared – and that requires informed debate. This is exactly the kind of exchange that today’s event is trying to promote. ”

For food to be safe, it must also be healthy

Addressing the forum, the FAO Director-General said that food safety cannot be only about preventing people from getting food poisoning or falling sick due to food-borne illnesses, but must also address multiple health risks associated with poor diets.

Today, more than 670 million adults are obese. Some projections estimate that the number of obese people will very soon overtake the number of people suffering from hunger in the world, which accounted for 821 million in 2017.

He noted that while hunger is circumscribed to specific areas, particularly in conflict zones and areas affected by climate change, obesity is everywhere. “We are witnessing the globalization of obesity. For example, eight of the 20 countries in the world with the fastest rising rates of adult obesity are in Africa,” he added.

Graziano da Silva stressed that obesity is associated with many chronic diseases, such as diabetes, heart disease, hypertension and some forms of cancer and costs about $2 trillion per year in direct healthcare and lost productivity. “This is equivalent to the impact of smoking or the impact of armed conflicts nowadays. So for food to be recommended for human consumption, it cannot only be safe but must also be healthy,” he said.

“If every government applied different food standards, trade would be more costly, and it would be much more difficult to ensure that the traded food is safe,” he added.

In this context, he noted that Codex Alimentarius – the body created by FAO and WHO for setting standards to address food-safety risks – is “the single most relevant international point for food standards” and urged all countries to enhance their participation in the Codex standard-setting work and facilitate the implementation of its standards.

He concluded by saying that FAO is highly committed to work with all countries and partners to promote sustainable food systems, and to ensure that traded food is safe, healthy and nutritious.

“There is no food security without food safety and healthy diets,” he said.

Getting fertilizer in the right place at the right rate