Home » Tracking weeds to stop them in their tracks 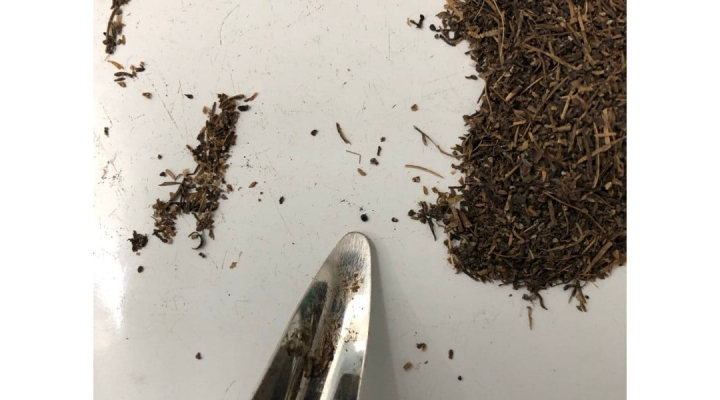 Palmer amaranth is an aggressive weed that can cause significant reductions in crop yield if it is not controlled. One Palmer amaranth seed is shown at the end of the lab scoop and is surrounded by the material in dried cow manure. The small size of these seeds makes it difficult to find and separate them from soil and manure. (Luis Allen)

MADISON, Wis. — Not that long ago, weeds spread at a much slower rate. Seeds would spread to nearby soil and move perhaps a few feet each year or would be transplanted by birds who flew with them several miles away. In today’s interconnected world, though, weeds can hitch a ride on a truck, boat, or even an airplane. What once might’ve taken generations to spread weeds from one region to another now takes no time at all.

This can be unwelcome news for farmers and consumers, who may not want to pay higher prices for the costs of weed control. Lately, one of those nuisances spreading farther than before is Palmer amaranth. One way it spreads is by contaminating livestock feed.

“Palmer amaranth is an aggressive weed that can cause significant reductions in crop yield if it is not controlled. Recently, it has been making its way into the Upper Midwest where it wasn’t previously established,” says Melissa Wilson, professor of manure management at the University of Minnesota. One of her lab’s goals is to track the spread of weeds like Palmer amaranth to stop it in its tracks.

Manure, it turns out, is the perfect tool for this investigation. Palmer amaranth seeds that contaminate feed will end up in manure, and when that manure is spread on fields as fertilizer, those seeds will grow into harmful weeds. Wilson’s team focused on how best to test manure for weed seeds. “If feed is suspected to be contaminated with Palmer amaranth seeds, testing it directly is definitely easier!” says Wilson. “In some cases, feed may have already been given to livestock after the supplier found out the source may have been contaminated. If the feed is already gone, this only leaves the manure for testing.”

Manure is a complex substance, so separating tiny seeds from it is tricky. The researchers tested six different methods. They all involved passing the manure through fine sieves to catch the seeds. The scientists also tested manure with or without straw bedding. The best method turned out to be rinsing the manure through the sieves with water. “We found that agitation from running water helped dislodge seeds that were caught in solids or in the sieves,” says Wilson. They recovered 90 percent of seeds this way, with or without straw bedding. They were then able to genetically test the seeds to confirm they were Palmer amaranth. That genetic test avoided the lengthy process of growing the seeds to identify their species.

“If farmers suspect that their livestock have been fed contaminated feed, we now have a simple and quick way to test the manure. This will allow them to make appropriate management decisions more rapidly including manure treatment, like composting,” says Wilson.

Although most consumers are happy not to be a part of the manure/seed separation process, they should see the benefit of this work, too. That’s because any work that helps farmers use manure responsibly is good for the whole food system. “Livestock manure is a great resource for crop production. It provides nutrients and can help improve soil health. But there are drawbacks, including the risk of weed seeds! Our research is helping to reduce the spread of a particularly invasive weed in the Upper Midwest,” says Wilson.