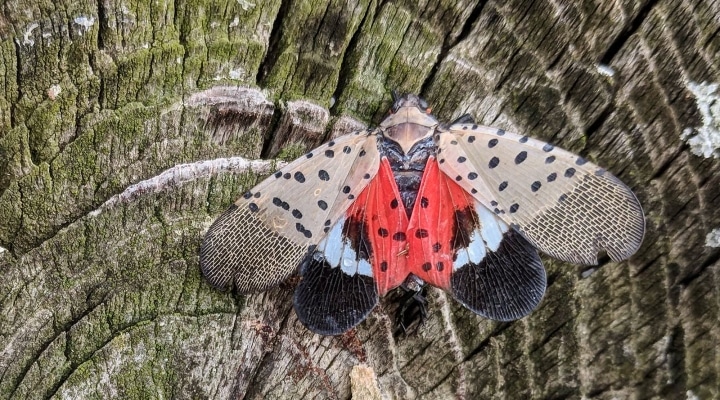 Assessing the potential spread of the spotted lanternfly in the Altoona area is the focus of a study underway by scientists in Penn State’s College of Agricultural Sciences. (photo by Chesapeake Bay Program)

UNIVERSITY PARK, Pa. — Assessing the potential spread of the spotted lanternfly in the Altoona area is the focus of a study underway by scientists in Penn State’s College of Agricultural Sciences.

“Outlier — or isolated — populations are important targets for management,” said Joe Keller, a postdoctoral scholar in the Department of Entomology. “Early detection and treatment can be essential for the effective management of invasive insects. In short, it’s generally easier and less costly to deal with a few hundred than it is a few thousand.”

Keller and fellow postdoctoral scholar Osariyekemwen Uyi are conducting the research under the guidance of Kelli Hoover, professor of entomology. Ethan Park, a forester with the state Department of Agriculture’s Bureau of Plant Industry, is helping.

The spotted lanternfly is an invasive insect from Asia that was discovered in North America in Berks County in 2014 and since has spread to 26 counties in Pennsylvania and to several surrounding states.

The planthopper feeds on the sap of important agricultural plants — including grape vines, fruit trees, nursery plants and hardwoods — and can be a nuisance in parks and yards as well, where the sugary honeydew it produces can cover surfaces and provide a medium for sooty-mold growth.

The insect first was reported in the Altoona area of Blair County in August 2019. In March, the county was among 12 added to Pennsylvania’s spotted lanternfly quarantine zone.

Being added to the quarantine list does not necessarily mean that a county is entirely infested; it also can indicate that a few municipalities within that county are having issues with the pest. The latter describes the situation in Blair County, noted Park.

“The spotted lanternfly population in Altoona is manageable,” said Park, who added that emerged egg masses were found last fall, suggesting that the insects have been in Altoona since 2018.

“Though it may have been present in Altoona for two seasons, it does not appear to have spread much, and the numbers appear to be low. This makes me hopeful that with landowner cooperation and reporting of sightings by the public, we will be able to contain the insects in Altoona.”

Keeping those isolated populations under control is one of the goals of the study, which began in April and will continue through the fall, a timeframe that runs parallel with the insect’s life cycle: egg hatching, early nymphs, late-stage nymphs, adults and egg laying.

With Park’s help, Keller and Uyi have set up study sites in several locations where the insect has been confirmed. The state Department of Agriculture is managing these populations by using the insect’s preferred host, the invasive Ailanthus altissima, or tree of heaven, as a trap tree.

This technique involves the removal of about 90 percent of the Ailanthus and treating those that remain with a systemic insecticide. “This forces the lanternfly to feed on the remaining tree of heaven and ingest insecticide, and it has proven to be a very effective form of control,” Park said.

The Penn State scientists are complementing that effort by working to locate the population’s outer edge using sticky tree bands and circle traps, both of which capture insects as they move up tree trunks. The sticky traps that Penn State uses do not trap nontarget species such as birds because the adhesive side faces inward.

The team, moving outward from the population’s center, is monitoring the number of spotted lanternflies found. In addition to trap counts, the researchers are looking for egg masses and for nymphs and adults not caught in the traps. Their data collection includes an estimate of population numbers and the types of trees on which egg masses and insects are found.

Another objective is to measure the effectiveness, costs and labor associated with each trapping method.

“Traps are useful in the detection of new invasions of insect pests, for delimitation of the area of infestation, and for monitoring population levels of established pests,” said Uyi. “Having information on how well certain traps work is vital for decision-making on control measures.”

Keller and Uyi anticipate there will be a few challenges, including the inability to access some private properties. However, they are optimistic that their findings, which they expect to release in November, will advance efforts to control the pest and will provide a roadmap for future efforts to control outlier lanternfly populations.

In the meantime, they underscored the need for citizens to learn about the spotted lanternfly and how they can help stop it. “Everyone must work together to stop the spread of this harmful insect,” Keller said. “If you spot it, destroy it and, most importantly, report it.”

Brian Walsh, a Penn State Extension educator based in Berks County, is assisting the team. The research has received funding from the U.S. Department of Agriculture.

More information about how to identify and control spotted lanternfly, how to report an infestation and how to comply with quarantine regulations is available on the Penn State Extension website at https://extension.psu.edu/spotted-lanternfly.