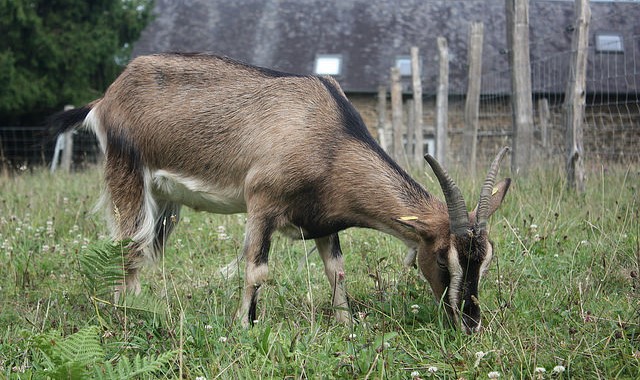 First Selectwoman Maureen Nicholson said goats have been used as natural lawnmowers in cemeteries throughout the country, a low-maintenance solution to an ongoing problem. (Tamsin Cooper, Flickr/Creative Commons)

The Dennis Cemetery off Murdock Road in Pomfret is one of about 10 cemeteries in town that officials have struggled to maintain, First Selectwoman Maureen Nicholson said. The cemetery holds roughly seven headstones, the earliest dating back to the late 1700s, though the overgrowth makes an accurate count of gravesites difficult.

“There’re a lot of cemeteries in town like this, some with only one grave and others with 50 or 60,” Nicholson said. “The trees grow in and even if you cleared them a couple years ago, without regular maintenance, it all grows right back.”

In an effort to address the overgrowth issue, selectmen this year again applied for a $2,000 Neglected Cemetery Account Grant from the state Office of Policy and Management, funding which eligible towns could use to clear weeds, mow, straighten gravestones and do other repairs and maintenance.

The grant money pool is replenished through fees collected on death certificates by the state Department of Public Health. The state set aside $29,000 for the program in 2015 and $42,000 in 2016, though there is no record of money being allotted last year.

The first-come, first-served grant program proved exceedingly popular with more than 70 towns applying between 2015-16 for the 37 grants awarded during that period.

But Pomfret officials aren’t just banking on getting an infusion of state cash to address their cemetery issues. A couple weeks ago, Nicholson was at the Dennis Cemetery when she noticed a neighbor living just east of the site.

“And I saw they had goats, so it was a little like divine inspiration,” she said. “I contacted the family and they agreed to graze the animals at the cemetery. It’s a good solution since weed whackers can damage stones and herbicides aren’t the best way to deal with the issue.”

Nicholson said goats have been used as natural lawnmowers in cemeteries throughout the country, a low-maintenance solution to an ongoing problem.

“But not every cemetery has a heard of goats nearby,” she said. “But I told the young man in the family to come down with the goats, bring a book and sit back while the animals eat their lunch.”

Nicholson said she’s also investigating the formation of a cemetery association, a group which could oversee maintenance of the town’s cemeteries independent from ever-changing administrations.

Sterling, which was awarded cemetery grants twice, is again applying for this year’s round of funding, First Selectman Russell Gray said. The town used its funding both years at the Gallup Cemetery off Porter Pond Road which is the final resting place of several Revolutionary War-ear graves.

“We used the money to clear trees from the perimeter and to repair a stone wall, as well as to fix some broken headstones,” Gray said. “If we get money again this year, we’ll work on the Riverside Cemetery near Town Hall, which also has several damaged stones.”

Gray said it’s important to keep up the town’s cemeteries, though the budget doesn’t necessarily leave much money to do so.

“Without this state money, we wouldn’t be able to do this kind of work,” he said. “It doesn’t seem like $2,000 is a lot of money, but every little bit helps.”