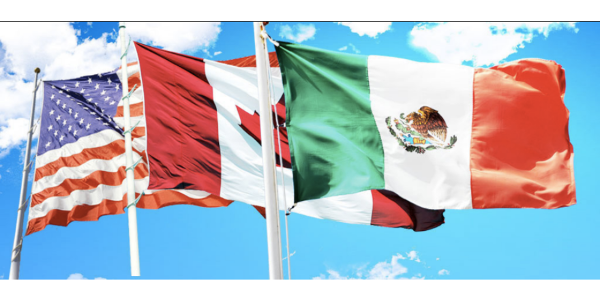 A Town Hall Meeting slated for 7 to 8:30pm on Tues., Sept. 19 in Kaukauna will gather stakeholders' input on the renegotiation of the North American Free Trade Agreement. (Screenshot from flyer)

CHIPPEWA FALLS, Wis. — A Town Hall Meeting slated for 7 to 8:30pm on Tues., Sept. 19 in Kaukauna will gather stakeholders’ input on the renegotiation of the North American Free Trade Agreement. The event, organized by the Wisconsin Fair Trade Coalition and its member organizations, will be at the Plumbers and Steamfitters Local 400 at 2700 Northridge Drive.

President Trump ordered the re-negotiation of NAFTA, and despite little media attention, two rounds of negotiations have already been held. The meeting will provide an update on these negotiations and what they mean for workers, farmers, our environment, and all of us as U.S. citizens.

“These free trade agreements have not resulted in a stable positive balance of trade for U.S. agriculture,” he added, noting that in 2015, the U.S. had an agricultural trade deficit of $839 million with Canada and $3.3 billion with Mexico.

WFU policy, established by its grassroots membership, also calls for international trade agreements to address currency manipulation by balancing currency exchange rates for fairness to family farmers throughout the world. The policy also supports country-of-origin labeling, which provides consumers the opportunity to know where their food is produced.

“We also need to address the role of free trade in this growing trend of corporate consolidation in agriculture and other sectors,” Von Ruden said. “The current administration seems content to allow this disturbing trend to continue.”

The Town Hall will feature short presentations on the negotiations with Canada and Mexico from representatives of manufacturing, environmental organizations and family farmers.  There will be ample time for discussion and questions from the audience and the media.

The following will be among the questions that will be addressed:

Wisconsin Farmers Union is a member-driven organization committed to enhancing the quality of life for family farmers, rural communities, and all people through educational opportunities, cooperative endeavors, and civic engagement. Learn more at www.WisconsinFarmersUnion.com.