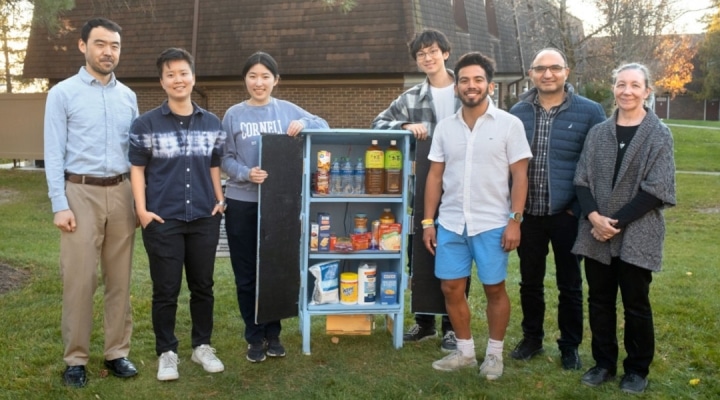 ITHACA, N.Y. — Three community organizations dedicated to food research and security and agricultural justice were honored by Cornell for their campus-community partnerships in 2022.

Speaking at the awards ceremony, Cornell President Martha E. Pollack offered her thanks and discussed the importance of community-campus partnerships.

“One of the things I love about Cornell is that even though we’re Ivy League, we’re never ivory tower,” Pollack said. “Our community is deeply connected with the communities around us. Cornell and local communities aren’t just shared – we continually shape each other in ways that make both of us stronger.”

Emmy’s Organics, which sells gluten-free foods nationwide, worked with Cornell AgriTech’s Food Venture Center and Center of Excellence in Food and Agriculture to develop and improve products, optimize processes and find local partners. In turn, the company has brought new product ideas to students in AgriTech’s capstone course in food science, allowing them the opportunity for mentorship while taking product ideas from concept to formula development.

Mutual Aid Tompkins and Zhang and students in his spring 2022 “Introduction to the Internet of Things – Technology and Engagement” class were recognized for their collaboration. Students and teaching assistants designed and installed a “smart scale” in one of Mutual Aid Tompkins’ many blue food cabinets around Tompkins and Cortland counties; the scale notifies the volunteer network when a cupboard is empty and in need of supplies. The project extended beyond the class to maintain engagement with Mutual Aid Tompkins all year through the Engaged IoT project team funded by the Shen Fund for Social Impact at Cornell Engineering.

“All of the students who partnered on the project are now better equipped, and justifiably quite excited, to apply what they learned in the course to other areas for real-world impact on food insecurity in Tompkins County and beyond,” said Lynden A. Archer, the Joseph Silbert Dean of Engineering in the College of Engineering. “Additionally, through their work on the project, our students learned more about issues in our county, from food insecurity to homelessness and the underlying issues of mental health and substance abuse.”

Also receiving a TOGO award were the Groundswell Center for Local Food and Farming, a nonprofit that empowers people from diverse backgrounds to build a more just and sustainable food system, and intern Bianca Garcia ’23, a Harrison College Scholar with an an additional major in anthropology and minors in nutrition and science and in technology studies.

Garcia spent her summer doing farm work and posing the question, “What is the power of food to heal?” She conducted interviews at Groundswell exploring the principles and practices of restorative justice agriculture. She sought out answers through interdisciplinary connections and hands-on research, connecting nutrition, food production, mental and physical wellness and cultural identity. She has continued her interviews throughout Tompkins and surrounding counties and is engaging with other local nonprofits and farmers.

The second half of the event recognized 19 inspiring and impactful community leaders who have or will soon be retiring, who each received TOGOs awards:

The final honors of the event went to Henry Granison, a former member of the Tompkins County Legislature, who died in November.

“This beloved husband, father and friend to all was a natural leader, thinker and doer,” said Susan Riley, deputy director of community relations at Cornell, “often ahead of the curve, but always leading with love and inclusion.” A plaque will be presented to Granison’s wife, Mary Beth Grant, senior associate dean of students and director of the care and crisis services team, and their daughters, Charlotte Granison and Samantha Granison.

A recording of the TOGO event will be posted on Cornell’s Community Relations website in the coming days. 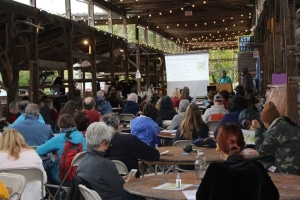 ITHACA, N.Y. — The Tompkins Food Future team and community partners invite local residents to attend a presentation of the new Tompkins County Food System Plan on Tuesday, September 27th from 5:00-8:00pm at the Stewart Park large pavilion in Ithaca. This free event will enable community stakeholders to learn about and celebrate the plan’s findings and recommendations, […] 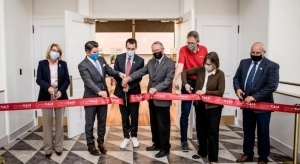 GENEVA, N.Y. — New York’s thriving food and farm economy demonstrates the adage that success begets more success. On Sept. 9, state and university leaders celebrated the $3.5 million renovation of Jordan Hall on the Cornell AgriTech campus in Geneva with a ribbon-cutting. The new space will enable Cornell AgriTech to better serve the educational […]