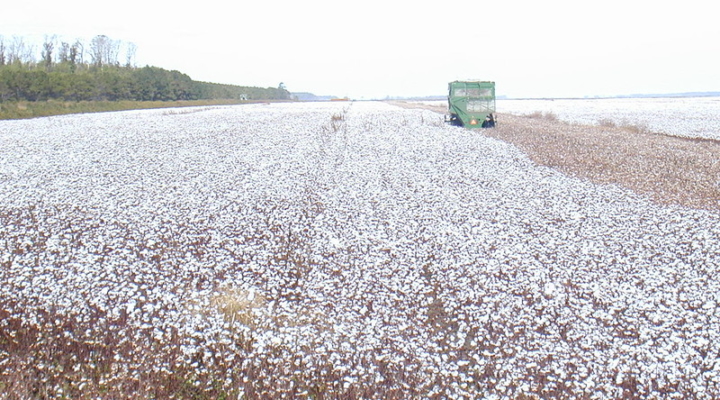 At harvest time, fruit and vegetable farmers must make tough decisions. After investing significant time and money to ensure high yields, they have to decide when it makes financial sense to keep harvesting crops from their fields and when it’s time to stop. (photo by Soil Science, creative commons/flickr.com)

RALEIGH, N.C. — At harvest time, fruit and vegetable farmers must make tough decisions. After investing significant time and money to ensure high yields, they have to decide when it makes financial sense to keep harvesting crops from their fields and when it’s time to stop.

Thanks to the Whole Crop Harvest project, farmers have a new protocol to help them make these decisions easier. Through the project, NC State University alumna and horticultural scientist Lisa Johnson, research assistant professor Rebecca Dunning and other NC State scholars from economics, sociology and engineering have been exploring farm-level food loss and what it means for farmers. The Whole Crop Harvest project aims to help farmers improve their income while cutting the amount of produce they don’t harvest and market.

Determining When It’s Wise to Harvest Again …
The researchers’ protocol, published as an NC State Extension Bulletin (“How to Determine the Potential to Increase Vegetable Yield Through Estimating and Reducing Field Losses”), helps farmers develop data about how much marketable and edible produce remains in their fields as the growing season winds down.

As an NC State Ph.D. student, Johnson interviewed N.C. farmers to better understand factors that play into their decisions to leave produce in the field. In the end, they told her, it usually comes down to the bottom line.

Farm labor to handpick fruits and vegetables is expensive. It can, Dunning says, account for around 50% of a farmers’ production costs. That’s why farmers hesitate to bring workers back to their fields for successive harvests, unless they think that doing so would be worth more than it would to leave their crops only partially harvested.

… And When to Consider Other Options
The NC State research found that several leftover crops could bring high enough value to sell profitably.

The economic findings are summarized in one of the project’s publications, “Putting Dollars to Waste: Estimating the Value of On-Farm Food Loss.”

If farmers “have the information about what’s left in the field and how much is there, what quality is there, they could pick up the phone to a buyer and market that product before putting in the financial resources it takes to harvest it,” Johnson says. “At first, nobody wants to talk about what goes unutilized, but when they understand what the data allows them to do, they get excited.”

The research also found instances when bringing the harvest crews back would not be worth it. In such cases, volunteer gleaners sometimes collect the edible leftovers and provide them to others in need.

The Society of St. Andrew is the largest gleaning organization in the United States, and its regional director in North Carolina, Michael Binger, says that the university’s research is redefining its goals.

“By that research, we now understand that there’s enough produce available, just at the farm level, to feed every hungry or food insecure person in the state of North Carolina three servings of produce every day, just by what’s left in the field,” he adds. “We take that as a challenge. Our mission is to address hunger in North Carolina. And this gives us a great base of understanding of what we can do.”

Raising Awareness
In addition to providing updated estimates of farm-level produce losses in North Carolina and developing the harvest protocol for growers, the researchers have raised awareness of such losses from the growers’ point of view. They’ve shared their findings with consumers, food banks, gleaners, agricultural media outlets and policymakers.

As Dunning notes, “Often, people unfamiliar with agriculture will say farmers should ‘plan better’ so that they don’t end up with excess yield. But farmers are always planning based on the best available information. It’s much more common that excesses arise from forces outside the farmers’ control — weather, pests, market conditions.”

Johnson points out another “popular recommendation.” “People don’t understand that it’s not feasible, in many cases, for growers to put time, effort and money into harvesting and transporting crops that aren’t going to give them a financial benefit,” she says.

In a related paper, “Farmer Harvest Decisions and Vegetable Loss in Primary Production,” the researchers say that a stronger recommendation would be to provide growers with incentives to reduce edible food loss. They also advise including them in discussions about strategies to reduce food waste.

Filling a Knowledge Gap
Before Johnson came to NC State as a doctoral student in 2015, she had noticed that public concern was rising about the amount of food wasted in the supply chain from wholesaler to consumer. She found little U.S. research related to why farmers weren’t fully harvesting their crops or to how much potential income they were leaving behind.

Work done in the 1960s had provided a rule-of-thumb: Estimated on-farm losses were between 1% and 20%, she says. “Growers didn’t really have a way to easily measure the amount of marketable or edible produce that’s left in their fields,” she says.

When she studied food loss on farms in North Carolina, the figure she came up with was much higher. At season’s end, 42% of marketable and edible crops remained unpicked.

“What we found was that we’re leaving a lot more in the field than what we thought,” adds Johnson, now an independent consultant.

To understand the full extent of losses, scholars need to consider what happens in other states and other crops. In an article for American Vegetable Grower magazine, Dunning and Johnson wrote that “we must assume (that measurements) would be different in each crop, in every region and state and every year.”

The takeaway, they say, is that farmers can measure food loss to manage it – and possibly to profit from it.

Moonbeam adds a big bang of flavor to Galaxy tomatoes