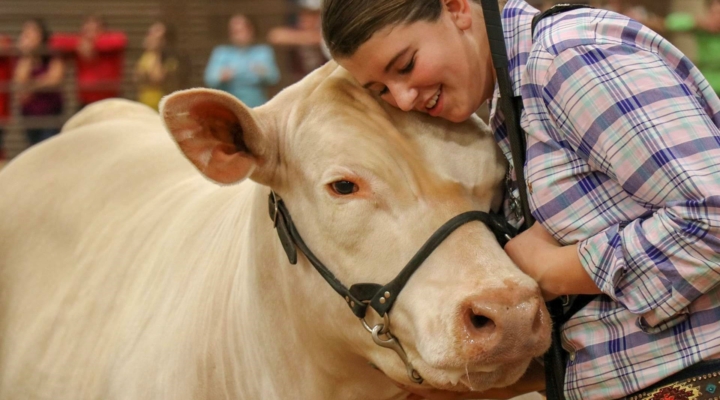 DALLAS, Texas — The 70th Annual Youth Livestock Auction kicked off with a record-setting sale of the 2018 Grand Champion Market Steer. This year’s prize-winning animal was purchased by Landmark Nurseries with Paula & Jim Prewitt and the Big Tex Champion Club, making auction history with their generous bid of $150,000. The preliminary amount raised for Texas youth in today’s auction is more than $1.3 million.

With 478 steers entered into the Youth Market Steer Show this year, earning the Grand Champion title was no easy feat. After hundreds of steers and hours of judging, the final decision was made; 14-year-old Ashton Floyd of the Denver City FFA took home the grand prize for her winning steer, Ultra. A new tradition beginning in 2017, the Fair introduced “The Champ”, a steer-shaped monument commemorating the Grand Champion Market Steer of the Youth Livestock Auction. This year, “The Champ” has been painted to resemble the likeness of Ultra and will be displayed outside of the Briscoe Carpenter Livestock Center throughout the Fair.

An annual tradition since 2015, full-time employees of the State Fair of Texas pitch in to purchase an animal in the auction. Continuing that tradition for the fourth year in a row, the State Fair team bid on a Reserve Champion Market Steer owned by Riggin Day of Meadow FFA for $10,000. Because the Youth Livestock Auction and Scholarship Program truly embodies the State Fair’s mission of promoting agriculture, education, and community involvement, the team feels very passionately about contributing to this cause.

Supported by community leaders and local businesses, the annual Youth Livestock Auction is a representation of the extreme dedication put forth by the exhibitors participating, along with the planning and efforts of the passionate individuals who organize the event. Considered the heart and soul of the livestock department, the Youth Livestock Auction brings families and friends together for an occasion that benefits the community in addition to providing fairgoers with some good old-fashioned fun! Approximately 3,500 entries from around the state competed for one of the coveted 392 spots in the Youth Livestock Auction this year. The students who earn a spot in the auction get to sell their animals to the highest bidder. Students then receive a previously-determined maximum payment for their animal, with all excess proceeds donated to the Youth Scholarship Program. The Youth Scholarship Program benefits students who have competed in youth livestock events at the State Fair, as well as students attending high schools in the Fair Park area. Through the Youth Livestock Auction and Scholarship Program, the State Fair has awarded more than $24 million in auction awards and scholarships.

The Fair congratulates all the students who participate in its youth livestock competitive events and is happy to support them in their pursuit of higher education through the Youth Livestock Auction and Scholarship Program. The State Fair of Texas is a 501(c)(3) nonprofit organization, and does not receive any government funding or support. Its nonprofit purpose is funded through the proceeds from the annual State Fair of Texas event. The net proceeds from the Fair are reinvested in Fair Park in the form of capital improvements; given as scholarships to deserving students throughout the state of Texas; used to support the Fair Park museum facilities and community outreach programs; and used to improve the State Fair’s operation – to help put on the next great State Fair of Texas. Help support the Fair’s mission of celebrating all things Texan by promoting agriculture, education, and community involvement through quality entertainment in a family-friendly environment by attending this year’s exposition.