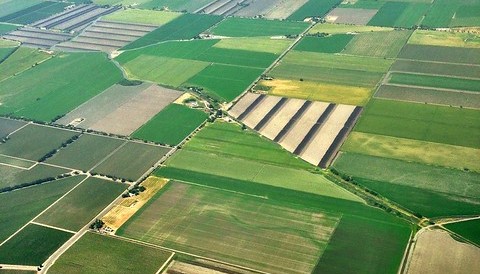 Despite a loss in farms on both the state and national level (-12.6% and -8.5% respectively), Washington County’s farm numbers actually increased by 4.5% over the past 20 years to 915 farms. (Stock photo via Claire Armstrong, Flickr/Creative Commons)

WASHINGTON CO., N.Y. — Cornell Cooperative Extension (CCE) of Washington County recently reviewed the extensive collection of data and statistics presented in the 2017 Census of Agriculture and is sharing the top ten trends and notable statistics contained within.

“It’s always exciting to go through the census numbers as they are the only source of uniform, comprehensive, and impartial agriculture data for every county in the nation,” said Brian Gilchrist, Washington County CCE Executive Director. “The numbers are able to quantify what we witness and experience with our farms and in return, utilize these numbers to justify or modify the programs and services we offer farmers within the county.”

Gilchrist added, “While agriculture is slightly more weathered today, due to low commodity prices, the statistics collected two and a half years ago show that Washington County’s diversity of farms – small and large, livestock and crops, old and new – remain our strength. Washington County was one of only eleven counties in the state that experienced an increase in farms! Despite economic conditions that are out of our control, Washington County continues to be a great place to farm!”

Washington County is one of the more rural counties in the state with a wide variety of commodities produced here. CCE of Washington County pulled out the following notable statistics and compared them to historical and/or state or national trends.

Despite a loss in farms on both the state and national level (-12.6% and -8.5% respectively), Washington County’s farm numbers actually increased by 4.5% over the past 20 years to 915 farms. Soil quality, abundant water, lack of development, proximity to markets and abundance of agricultural services are all qualities that make Washington County an attractive place to farm.

The Census reported that Washington County farms generated $135,813,000 in 2017, a 21% increase over 2012 and a 75% improvement over 1997. While that is a sizable dollar figure, one must take into consideration inflation over that time period and market prices at that given time.

Farms are only profitable if they are able to cover their expenses. In 2017, county agricultural expenses totaled $117,295,000, a 26% increase over 2012. That leaves only $18,518,000 to be utilized for debt and interest payments, capital investments and family living for the county’s 915 farms. The leading expenses over the past 20 years continue to be animal feed and labor, collectively accounting for 54% of a farm’s total expenses.

Today’s farm operations are run as businesses and the Census reported $27,514 as the average net cash farm income for Washington County farmers in 2017. That average is 35% lower than the state average, which could be attributed to the county’s high percentage of smaller and part-time farms.

New York is the nation’s third leading dairy producing state, and milk is Washington County’s leading commodity in terms of sales. With 23,000 dairy cows on 111 farms, Washington County dairy farmers generated $95,343,000 in 2017, up 2% from 2012. The sale of milk accounts for 70% of the Washington County’s total agricultural receipts. The average herd size in Washington County is 207 cows, however 58% of the herds have less than 100 cows, and only 9 farms in the county have more than 500 cows.

Over the past five years, Washington County’s 45 maple sugarhouses doubled their capacity with twice the number of taps (95,000 taps) and producing nearly 30,000 gallons of pure maple syrup. While the maple business is seasonal in nature and often a part-time or on-the-side type of operation, the Census reported that the county’s maple producers brought in just over $1 million in sales in 2017, up 33% from five years prior. Washington County ranks 6th in the state for maple production.

Blackberries, blueberries, raspberries, strawberries, even currant and elderberries are all grown in Washington County. The number of farms growing berries increased 157% over the past ten years, from 19 farms in 1997 to 49 farms 2017. In 2017, Washington County had 114 acres devoted to berry production and the sale of berries was valued at $657,000 for the county, up 86% from 2012.

According to the Census, the county’s goat herd doubled from 632 goats in 2012 to 1,121 in 2017. Sixty percent of the herd are dairy goats, while 39% are meat goats and less than 1% are Angora goats raised for their valuable mohair. Receipts from the sale of goat related products, which could include livestock, milk, meat and fiber, more than doubled (increased 214%) from $34,000 to $107,000 during that same time period. Of those receipts, 87% is from the sale of goat milk.

The Census of Agriculture, conducted once every five years, is a complete count of U.S. farms and ranches and the people who operate them. Even small plots of land – whether rural or urban – count if $1,000 or more of agricultural products were produced and sold, or normally would have been sold, during the census year. The Ag Census, looks at land use and ownership, operator characteristics, production practices, income, and expenditures.

U.S. Census of Agriculture data can be found online at www.nass.usda.gov/AgCensus, where the information is available through a searchable online data base or can be downloaded as PDF reports.

Cornell Cooperative Extension is committed to diversity, equal opportunity and affirmative action in the development of its policies, programs, procedures and practices through its affiliation with Cornell University, and as a part of the national extension system through the United States Department of Agriculture. Here in Washington County, CCE works to enable its residents to improve their lives and communities through partnerships that put experience and research knowledge to work. Most programs and services are either free or low-cost and range in topics from 4-H to agriculture to family and consumer sciences. Learn more about CCE of Washington County by visiting http://washington.cce.cornell.edu/ or follow @CCEWashingtonCounty on Facebook and Instagram.