Home » Too much pork, tariffs mean too few buyers 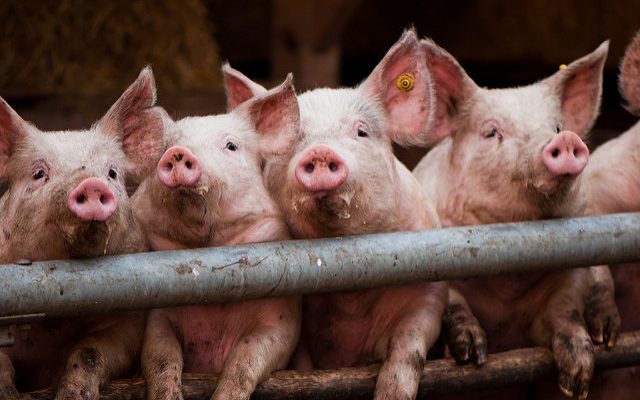 Estimated losses are expected to be large this fall and winter with losses averaging about $25 per head for this six month period. Hog prices may be close to breakeven in the second and third quarters before returning to losses greater than $20 per head in the last quarter of 2019. Losses for the calendar year of 2018 are estimated at a loss of $10 per head and $12 per head of loss in 2019. (Tim Geers via Flickr)

URBANA, Ill. — The pork industry appears to be headed for a period of large losses in which excess pork supplies force prices below costs of production, according to Purdue University agricultural economist Chris Hurt.

“Demand will likely be weakened by reduced exports with tariffs in place on U.S. pork exports to China and Mexico. On a positive note, Chinese tariffs on U.S. grains and soybeans are helping to erode feed prices along with favorable growing season weather,” Hurt says.

The industry has expanded the breeding herd by 3 percent according to a recent USDA producer survey. This is the highest rate of breeding herd expansion since this expansion phase began in 2015. Hurt explains that a breeding herd of this magnitude is likely to be a primary contributor to excess supplies in 2018 and 2019.

The second driver of the large losses facing the pork industry revolve around the current trade war the U.S. has entered.

“The U.S. pork industry has done an amazing job of producing low costs and high-value pork products and adapting them to our foreign customers,” Hurt says. “As a result, we have targeted exports as a strategic objective to grow the U.S. pork industry. Our success in growing exports to 22 percent of production means that pork became a target of both China and Mexico.”

Pork exports started the year with a lot of promise, up 9 percent at the end of April compared to the January to April period last year. Chinese tariffs on U.S. pork began on April 2 and were raised again on July 6 making additional tariffs of at least 50 percent. Mexico placed tariffs of 10 percent on U.S. pork June 5 and raised those to 20 percent July 5.

Weekly export data from USDA suggests a sharp drop in pork export sales during the month of June, representing about a 25 percent decrease from last year.

“Weakness in exports will be expected as long as the tariffs stay in place. China has also placed tariffs on U.S. beef and poultry which may reduce U.S. exports of these competitive meats,” he says.

Just how large are the loss prospects right now considering the large pork supplies, reduced exports due to tariffs, and reduced feed prices due to tariffs and favorable growing conditions?

Liveweight prices for 51-52 percent lean carcasses are expected to average about $49 in the third quarter of 2018 before dropping sharply in the last quarter to near $40. Current estimates of cost of production are near $50.

Estimated losses are expected to be large this fall and winter with losses averaging about $25 per head for this six month period. Hog prices may be close to breakeven in the second and third quarters before returning to losses greater than $20 per head in the last quarter of 2019. Losses for the calendar year of 2018 are estimated at a loss of $10 per head and $12 per head of loss in 2019.

Feed costs are expected to be somewhat lower in the second half of 2018 versus the first half.

“This is especially true for soybean meal where Decatur prices for high protein meal were near $365 per ton in the first half,” Hurt explains. “That same price in the second half is expected to be closer to $340 per ton. Unfortunately, corn costs may be similar in both halves of the year and thus the modestly lower feed costs are not enough to offset low hog prices.”

Hurt’s prices for hogs and feed are primarily based on July 9 futures prices. “Clearly, agricultural product markets are in a period of high uncertainty and volatility,” Hurt says. “Weather will continue to be a driver of crop prices over the next six to eight weeks. What happens to tariffs on U.S. exports of crops and animal products will also add dynamic price potential.

“Given the heightened level of uncertainty, most pork producers will not want to make long-term decisions at this point. That means carrying on as best they can with short-term plans. The current trade war that agriculture has been unwillingly forced to participate in has an unknown and difficult to predict outcome. Only time will help bring the ‘end game’ into better focus.”

Trump’s “help for farmers” may be hindrance