Subscribe
Home / Missouri / Too little water, too much heat puts corn at risk 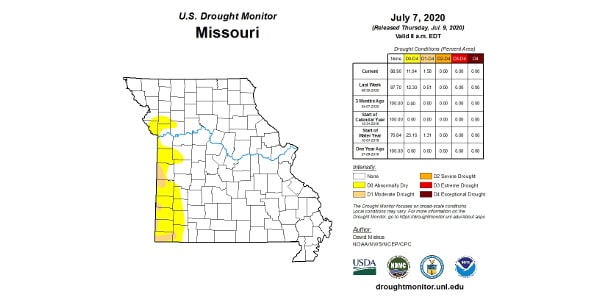 Moderate drought for as little as five consecutive days can cause major damage in corn, according to University of Missouri Extension agronomist Bill Wiebold.

COLUMBIA, Mo. — Moderate drought for as little as five consecutive days can cause major damage in corn, according to University of Missouri Extension agronomist Bill Wiebold.

Unusually dry conditions, largely concentrated in southwestern Missouri and small pockets elsewhere in the state, come at a bad time for tasseling corn. The National Oceanic and Atmospheric Administration issued a drought early warning on July 7 for Missouri River Basin and much of the Midwest. Spotty rainfall and extreme heat is expected to exacerbate the situation.

Wiebold said that one of the big hazards to the crops is the hot nights. High nighttime temperatures increase respiration, which burns up sugars that corn plants make during the day.

Corn shows signs of stress when leaves roll as a defense mechanism as the plant tries to take up water and nutrients. Stressed plants are also more vulnerable to disease and insect damage.

According to Wiebold’s research, the biggest risk for yield loss happens during the R1 silking growth stage. USDA’s July 6 Crop Progress Report shows 21% of Missouri corn is in silking stage.

Drought can have two major effects on yield at this stage. First, drought slows the growth of silks as they lengthen under the husks. Silks may emerge from the end of the husks after the pollen sheds from the tassel. Although pollen sheds from tassels for three to seven days during R1, silks may miss some or all of the pollen. Each potential kernel (ovule) has a silk attached to it. When a pollen grain falls on a silk, it germinates, produces a pollen tube that grows the length of the silk and fertilizes the ovule.

The second effect is drying of the silk while the pollen tube grows through it. This can cause the silk to deteriorate and block the pollen tube. With either effect, the result is much smaller ears with fewer kernels.