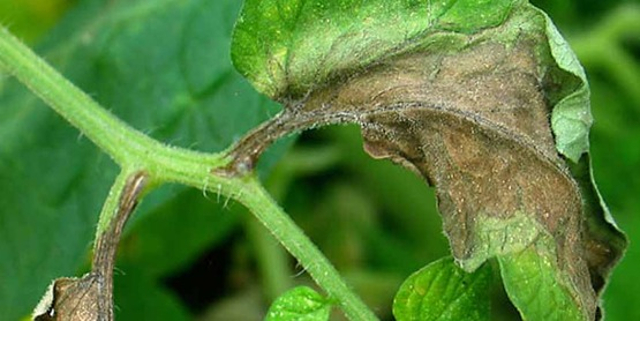 ALLEGANY CO., N.Y. — During the second week of June tomato “late blight” was found in Onondaga County, New York. According to USAblight, a national project on tomato and potato late blight in the U.S., to date there are four areas of the country – New York, Pennsylvania, and two regions in Florida – that reported occurrence of the disease in 2018.

I wrote “blights” in the title of this article because there are actually two very different blight diseases of tomato and potato (and some of their relatives in the plant Family Solanaceae). “Late blight,” caused by the fungus-like water mold, Phytophthora infestans, is a devastating disease that can quickly wipe out many acres of crop. “Early blight,” whose causal agent is the true fungus, Alternaria solani, can be a significant cause of plant mortality and crop loss, but it usually doesn’t spread as fast. To confuse the matter further, “late blight” often occurs early in the growing season when cool, wet weather conditions allow for the rapid spread of swimming spores, called zoospores, to spread from plant to plant. “Early blight,” on the other hand, often occurs later in the growing season and is typically first manifested on older leaves and maturing tomato fruit and potato tubers. However, both diseases can occur during any part of the growing season as long as environmental conditions are favorable for reproduction and spread of the pathogens.

Fortunately, the symptoms of the two blights are fairly easy to tell apart. “Late blight” symptoms appear as rapidly-progressing dark brown/green water-soaked lesions on the leaves of tomato and potato. Discoloration usually begins on the margins of leaves and soon the entire leaf is covered and dies. White spore masses and cells of the water mold typically develop on the underside of the affected leaf. Purple/black spots on the leaf stalk and stem, and grayish green, greasy or water-soaked lesions on green or maturing tomato fruit become visible. The entire plant may die within a day or two, and the disease can rapidly spread from plant to plant and to adjacent fields. The tomato fruit or potato tuber rots, has a foul odor, and is inedible.

“Early blight” symptoms are likely noticed on lower leaves first. Leaf spots are dark brown to black, enlarging in concentric rings that give the lesion a target-like appearance (this symptom is not seen in late blight infections).

Affected leaves then turn yellow and either dry up or fall off. Stem lesions are usually black and may kill a branch or the entire plant. Maturing tomato fruit develops sunken, blackish circles that also resemble targets at first. These then enlarge and eventually merge and the spores of Alternaria produce a black, velvety texture in the centers of the spots.  Underground potato tubers do not escape the disease as spores are washed into the soil from aerial plant surfaces. Tubers develop small, black, sunken spots that render the potato unusable.

Both pathogens can overwinter in plant debris, rotting fruit or infected tubers left in the field. Phytophthora infestans (late blight) requires a living host to survive between seasons. Usually it lives in infected potato tubers which can survive in storage or the soil (to become volunteers) after harvest or anywhere potatoes might be discarded. Sanitation can help greatly to reduce next year’s inoculum – i.e. spores and cells of the fungi. Unfortunately, especially in the case of Phytophthora, cleanliness, crop rotation, and eradication of weeds may not prevent next year’s epidemic because the organisms easily spread from field to field and farm to farm by wind, rain, machinery, and human apparel as long as environmental conditions are favorable.

Resistant varieties of tomatoes and potatoes have been developed over the last few decades. There are limits to this approach, as well, because different “races” (varieties) of the fungi have different degrees of aggressiveness and may favor certain cultivars of the crops. Thus, for example, the “US8” isolate of Phytophthora is resistant to mefenoxam (a commonly used fungicide); it is a very aggressive pathogen of most potato cultivars, but only moderately so of tomatoes. And, since sexual reproduction and mutation always create new genetic variants of the fungi, what may have been a pathogen-resistant cultivar crop a few years ago, may not be so in the future.

Of the two diseases, late blight is the more devastating. World-wide, the pathogen causes billions of dollars’ worth of crop losses annually. Historically,Phytophthora infestans was responsible for the deaths of millions of people from starvation. If your ancestors came to the U.S. or Canada from Ireland or Germany in the 1840s and ‘50s, most likely it was because of the “potato famine,” brought about by the loss of that important and nutritious crop due to late blight. During World War I, more than half a million people starved to death in Germany because supplying the war effort took away all available control measures to fight the pathogen.

So, how does one control these blights? In addition to the aforementioned sanitation and use of disease-resistant varieties, early intervention is of paramount importance. The most effective preventative fungicides currently include chlorothalonil or copper-based products, such as copper sulfate, copper octanoate or copper soap. The copper fungicides are generally considered acceptable for organic farmers, but please check with the Northeast Organic Farmers Association (NOFA) for the most up-to-date standards. A “biofungicide,” made from the bacterium Bacillus subtilis, is available under various product names (“Plant Guardian,” “Natria Disease Control RTU,” etc.). Regardless of the type of material used, please keep in mind that the pesticide label is a legal document and you must follow the instructions enclosed with the container. To do otherwise is against the law. The use of chemicals is not always necessary. If weather conditions appear to favor disease development (80-100 percent relative humidity; daytime temperatures  of 60-80 degrees F for several days), then spraying may save at least some of the crop. Disease is not favored by hot, dry conditions which keep fungal development and infection in check. Scouting for the pathogens, and accurate weather forecasting are two important tools in predicting potential outbreaks of disease.

There are numerous useful websites to help with identification and recommendations. Cornell Cooperative Extension (CCE) has extensive information at:

or contact your county CCE Gardening Helpline for more information.

There is also a national clearinghouse, USAblight.org, that deals with late blight information.  Phytophthora infestans and Alternaria solani are extremely important disease-causing organisms for some of our most widely used crops.  For the home gardener the rapid loss of potato and/or tomato from late blight can be a heartbreaking and discouraging event.  There are numerous steps that you can take to reduce the likelihood of infection and death of tomato and potato plants. These include choosing resistant varieties, sanitation, crop rotation, paying attention to weather forecasts, and the preemptive use of antifungal products during times when the crops are most susceptible to attack.