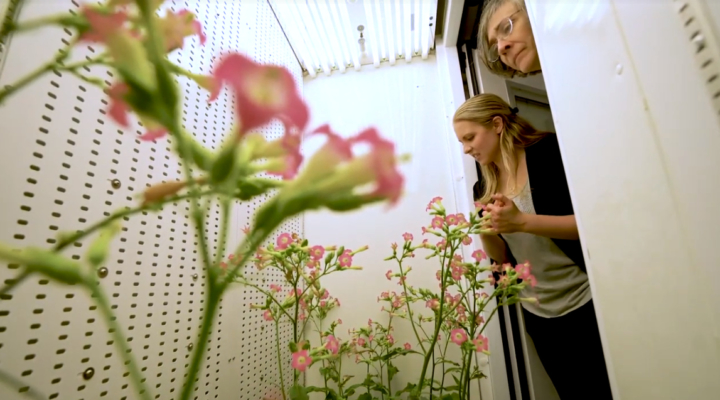 Industrial enzymes and other proteins are currently made in large, expensive fermenting reactors, but making them in plants grown outdoors could reduce production costs by three times. (Cornell University)

ITHACA, N.Y. — A new Cornell University-led study describes the first successful rearing of engineered tobacco plants in order to produce medical and industrial proteins outdoors in the field, a necessity for economic viability, so they can be grown at large scales.

The market for such biologically derived proteins is forecast to reach $300 billion in the near future. Industrial enzymes and other proteins are currently made in large, expensive fermenting reactors, but making them in plants grown outdoors could reduce production costs by three times.

Researchers from Cornell and University of Illinois have engineered plants capable of making proteins not native to the plant itself. “We knew these plants grew well in the greenhouse, but we just never had the opportunity to test them out in the field,” said Beth Ahner, professor of biological and environmental engineering and senior author of “Field-grown tobacco plants maintain robust growth while accumulating large quantities of a bacterial cellulase in chloroplasts,” published in the journal Nature Plants.

That opportunity came when University of Illinois plant biology professor Stephen Long obtained a permit from the U.S. Department of Agriculture to grow the genetically modified plants in the field.

Conventional wisdom suggested that the burden of asking plants to turn 20 percent of the proteins they have in their cells into something the plant can’t use would greatly stunt growth.

“When you put plants in the field, they have to face large transitions, in terms of drought or temperature or light, and they’re going to need all the protein that they have,” Ahner said. “But we show that the plant still is able to function perfectly normally in the field [while producing nonnative proteins]. That was really the breakthrough.”

Jennifer Schmidt, a graduate student in Ahner’s lab, and Justin McGrath, a research scientist in Long’s lab, are co-first authors of the paper. Maureen Hanson, the Liberty Hyde Bailey Professor in the Department of Molecular Biology and Genetics, is also a co-author.

The study was funded by the USDA.