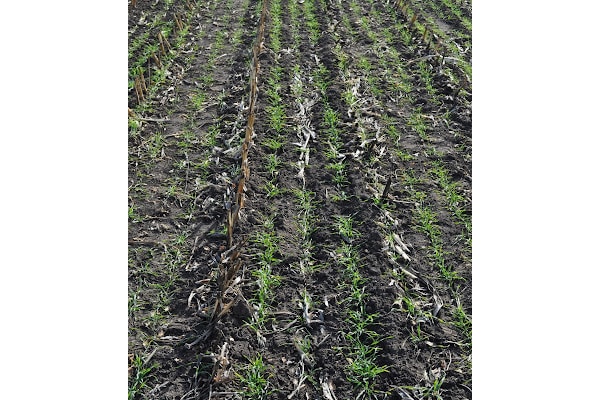 Cereal rye seeded with a drill 9/17 after corn silage harvest at Rosemount in 2020. Picture was taken on 11/6, or 7 weeks after seeding. (Photo: Liz Stahl/U of M Extension)

MINNEAPOLIS — Earlier this season, a lack of soil moisture across much of the state raised concerns about the potential for successful cover crop establishment this fall. Most areas still need more moisture to recharge the soil profile but recent rains have improved the moisture status overall. This has also improved the likelihood for successful establishment of a cereal rye cover crop this fall.

One of the best fits for a cereal rye cover crop is following harvest of corn silage, a small grain, or a canning crop when going to soybean the next year. These rotations provide a wider window for establishment before frost, setting the rye up for increased growth in the spring. In a corn/soybean rotation, seeding cereal rye after corn, either after harvest or once corn has reached physiological maturity, is another option.

Seeding cereal rye as a cover crop before soybean is preferred over seeding before corn. One reason is that cereal rye appears to have less of an impact on soybean yield than corn yield. Research conducted at the Southwest Research and Outreach Center near Lamberton in 2020 found no difference in soybean yield when cereal rye was terminated 10 days prior to planting, at planting or 10 days after planting. In contrast, corn yield was reduced 4% when termination was delayed until planting compared to 10 days prior to planting, and an additional 4% when delayed until 10 days after planting. Soybean can also tolerate later planting dates better than corn, which can allow for more cover crop biomass accumulation in the spring. Concerns about a “green bridge” for insect and disease pests also tend to be greater with corn planted into cereal rye since both are grasses.

Although you can potentially seed cereal rye into November, University of Minnesota research has shown that cereal rye biomass in the fall and the following spring has been significantly greater when seeding occurred by mid-to late-September. More biomass means greater potential for the cover crop to provide soil health benefits, like protection from soil erosion, and weed control.

Drilling provides the best chance of successful establishment due to increased soil to seed contact. Aerial or broadcast seeding are other options, although it is recommended to increase the seeding rate from 60 pounds/acre (for drilling) to around 85 pounds/acre.

Residual herbicides are key in the battle against weeds like waterhemp, but they can pose a challenge when integrating cover crops into your rotation. Herbicide carryover potential can increase under drought conditions, so be sure to check the labels of products used during the growing season to see if any may hinder cover crop establishment this fall. Research has shown, fortunately, that cereal rye is one of the most tolerant cover crop species to herbicides commonly used in a corn/soybean rotation. If the cover crop will be hayed or grazed this fall or next spring, check labels for any rotational or grazing restrictions. The publication Herbicide Rotational Restrictions for Cover and Forage Cropping Systems by the University of Wisconsin provides a handy summary of restrictions, but check the herbicide label for the most up-to-date information. Other resources include the Take Action Herbicide Persistence and Carryover to Cover Crops Fact Sheet and Using herbicides and cover crops in corn and soybean.

Drought conditions may continue into 2022, so keep an eye on conditions next spring. A cover crop’s impact on soil moisture is complex and impacted by many factors. For example, cover crops can reduce run-off and increase infiltration, which can help retain soil moisture. On the flip side, cover crops need moisture to grow, potentially leading to competition with the cash crop when moisture is lacking. If drought conditions persist this spring, err on the side of earlier termination (e.g. prior to planting of the cash crop) versus later to help reduce potential for the cover crop to compete with the cash crop for moisture.

There are certainly other species one can plant as a cover crop. Cereal rye is highlighted here for several reasons: it has been one of the most reliable species to establish, it overwinters in Minnesota, seed is usually available at a relatively low cost, research has shown it can provide soil health benefits, and it is relatively easy to terminate in the spring with a timely herbicide application. As always, be sure to consult with your crop insurance representative to make sure your planned practices do not create any problems with your coverage.

Check out our Minnesota Cover Crop Recipe – Post Corn, Going to Soybean: Use Cereal Rye for more details, as well as the U of M Extension Cover Crop website at z.umn.edu/cover-crops.

Potassium needs for corn and soybean