Subscribe
Home / California / To reduce greenhouse gases, dairy has solutions for all 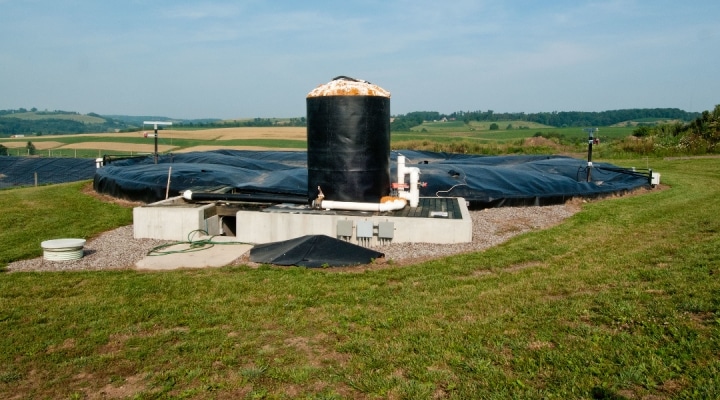 According to the Food and Agriculture Organization of the United Nations, North America – which is dominated by U.S. dairy production – is the only region in the world where absolute emissions decreased from 2005 to 2015, by a total of 5 percent. That occurred even as milk production increased over that same time period. Above: Anaerobic digester on a dairy farm. (U.S. Department of Agriculture, Flickr/Creative Commons)

That’s a big reduction – and one from a farm without a lot of dairy cows. The farm’s mostly Holstein 174 milking-cow herd is much smaller than many other operations with the same technology. They make it work through cooperation: Their digestor is also supplied by the farm’s 30 beef cattle and food waste from local businesses.

The Williams family’s history of stewardship goes back to 1661, caring for their animals across 13 generations. A founding member family of the Agri-Mark cooperative, they have shown that tackling greenhouse gases in dairy can be scalable, as well as doable, for farms of all sizes today and in the future. That’s key to the dairy sector’s goal of net-zero greenhouse gas emissions by 2050. Solutions look different for different operations. They’re all united by a common goal, and common values.

On the other side of the country, in Sunnyside, Washington, Dan DeGroot has adjusted his cow housing at Skyridge Farm switching from an open lot to a free-stall operation beginning in 2003.

Other changes, like a recycling program, further technology upgrades and modified tilling, were all adopted after DeGroot systematically analyzed as many processes on his farm as possible and started selecting areas for improvement.

One of the tools available to farmers wanting to quantify and improve their sustainability efforts is the FARM Environmental Stewardship program area. Using a peer-reviewed model, the program estimates farm-level greenhouse gas emissions and energy use on dairy farms. It also provides tools for farmers to improve their carbon footprints.

Farms that undergo an environmental stewardship evaluation come away with a better understanding of how their current practices relate to greenhouse gas emissions. Then, with FARM resources such as its Continuous Improvement Reference Manual, they can set goals to decrease their emissions, helping to set the sector as a whole on a path toward Net Zero, along with a set of sustainability goals for 2050 that include becoming carbon neutral or better, optimizing water use while maximizing recycling, and improving water quality.

Right now, the U.S. dairy industry is responsible for less than two percent of GHG emissions in the country. Much of that is methane, which has an impact that many scientists say is likely overstated. According to the Food and Agriculture Organization of the United Nations, North America – which is dominated by U.S. dairy production – is the only region in the world where absolute emissions decreased from 2005 to 2015, by a total of 5 percent. That occurred even as milk production increased over that same time period.

That doesn’t happen because of luck. The DeGroots and the Williamses found tools that work for them and scaled them for success. But they’re far from the only dairy farmers who have done so – such stories can be told across the sector. Collectively, the efforts of these farmers show how U.S. dairy is already a force for good on the global climate stage. The work has already been going on for decades. Its impact only grows more powerful with each passing day.