Subscribe
Home / California / To help the bees, protect the prairie 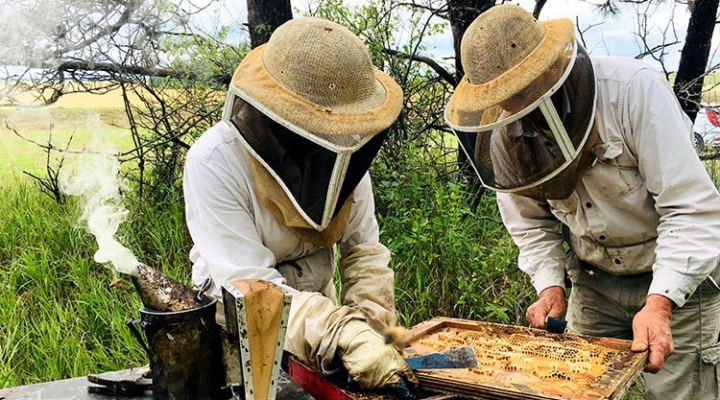 Two beekeepers, Bill and Wendy Klett, tend to their hives in North Dakota. Bees thrive in the the Prairie Pothole Region, which extends across five Midwestern states. (UC Berkeley photo by Jennie Durant)

BERKELEY, Calif. — California almond farmers who depend on commercial bee hives to pollinate their lucrative crops would benefit from increased efforts to protect essential bee foraging territory in northern prairie states, according a University of California, Berkeley, researcher.

A new paper, published in the journal Land Use Policy, shows that a government program that pays farmers to let marginal farmland go fallow has protected a critical bee refuge that supports 40 percent of the country’s commercially managed honeybees.

But changes to the program have imperiled the health of America’s commercial bee population, which is trucked around the country to pollinate some 30% of all major food crops, from California almonds to Florida oranges.

Much attention has been paid to the role pesticides, parasites and disease play in the well-documented population declines of the honey bee, but less research has been done on the role land policy decisions have on bee populations, said Jennie Durant, a recent Ph.D. recipient from UC Berkeley’s Department of Environmental Science, Policy and Management.

“If we want to address bee declines, we need to pay attention to these land use trends, which also play an important role,” said Durant, who authored the paper with Clint Otto, a research ecologist with the U.S. Geological Survey.

Durant and Otto examined the Conservation Reserve Program, a program started in 1985 to encourage farmers, many of whom grow corn and soy, to plant vegetative covers such as perennial grasses and bee habitat on lands that are difficult to productively farm.

The pair paid particular attention to the Prairie Pothole Region, an area of sunken wetlands and diverse grasslands that stretches across Montana, Minnesota, North Dakota, South Dakota and Iowa.

The area is a prime summer habitat for commercial bees, which count on the protected grasslands for protein-rich pollen, and is a source of much of America’s commercial honey.

But the number of acres in the Prairie Pothole Region protected under the reserve program has shrunk by half since 2007, putting bee colonies at risk and harming the profits of commercial beekeepers who depend on happy, healthy bees for honey.

The reasons for the changes are numerous, Durant and Otto found. They include caps on the reserve program, government policies that support ethanol fuels and changes to crop insurance programs in 2014 that encouraged farmers to plant more soy or corn. Corn and soy crops are also often treated with chemicals, called neonicotinoids, that are harmful to bees.

Durant and Otto pointed to a number of actions the federal government could take to better protect bee habitat in the Midwestern prairies, including increasing the number of acres protected under the Conservation Reserve Program and changing crop insurance policies to discourage farmers from planting new crops.

But the key is understanding how connected agricultural geography is when it comes to bees.

“Any industry that is reliant on bee pollination relies, often unknowingly, on having healthy forage sites where bees replenish and build up their numbers in the summer to prepare for winter,” Durant said. “That way, by the time they come to California in the spring for almonds, they’re ready to go.”