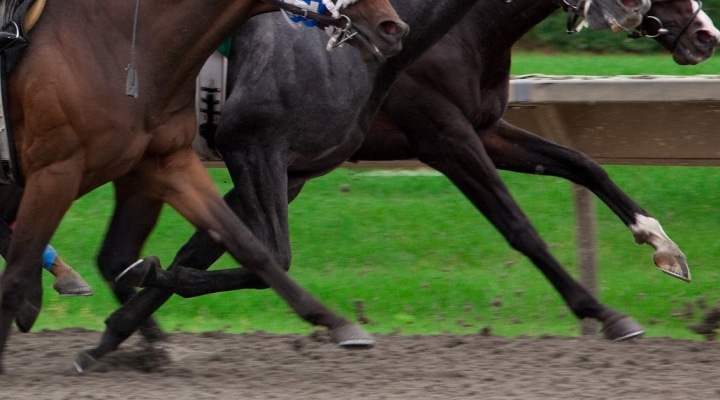 Tiz the Law would be the first New York-bred colt to win the Belmont since Forrester in 1882. (Stock photo via Paul Kehrer, Flickr/Creative Commons)

BELMONT, N.Y. — While there won’t be school buses of fans hoping to see a New York-bred horse make Belmont history, there is a busload of Triple Crown expectations heading into Saturday’s race.

Seventeen years ago, Jack Knowlton and the other owners of Funny Cide packed into school buses and headed to Belmont Park in New York, hoping to see the horse capture the home-track victory they had dreamed of. It didn’t happen. Now, however, Tiz the Law looks every bit like the best 3-year-old in the world and could deliver his owners and trainer Barclay Tagg the elusive crown.

It’ll take something spectacular Saturday from a watered-down field to prevent the Triple Crown favorite from becoming the first New York bred to win the Belmont in over 130 years and taking a powerful stride toward the Kentucky Derby.

“Barclay doesn’t get the kind of horses like Funny Cide and Tiz the Law very often, but when he does get an opportunity, he makes the most of it,” Knowlton said. “Fortunately, Tiz the Law is the kind of horse that seems to take everything in stride and he’s very easy to work with. … From all indications, he’s doing as well as he’s been doing all year, and hopefully that’ll carry over into the Belmont.”

Tiz the Law won his two starts this year by a combined 7¼ lengths, including the Grade 1 Florida Derby on March 28. He’s the class of the Belmont after injuries to Bob Baffert-trained Nadal and Charlatan and other defections in a year the coronavirus pandemic pushed the Kentucky Derby back to Sept. 5 and the Preakness to Oct. 3.

“Tiz the Law has been the best 3-year-old since January basically and he remains that,” retired jockey-turned-NBC Sports analyst Jerry Bailey said Tuesday. “He would’ve been favored in whatever Triple Crown race we ran first first, so we have a superstar that we’re going to see on Saturday.”

It’s an unconventional schedule with the three Triple Crown races being held out of their normal order. The Belmont is being run at 1 1/8 miles instead of a mile and a half and the traditional third jewel is leading off the series for the first time.

But Tagg, 82, has Tiz the Law primed for this moment.

“Barclay Tagg is a very experienced, skilled horse trainer, and I think once he knew kind of what the schedule was, he’s been focused on this,” said rival trainer Todd Pletcher, who is expected to challenge Tiz the Law with Dr Post and Farmington Road. “It looks to me like the horse is training sensationally. He looks great on the race track. I think it’s not been an ideal scenario for anyone, but I think there’s no doubt in my mind that Barclay will have his horse ready to go.”

Tagg got Funny Cide ready in 2003 when he won the Derby and Preakness before finishing third in the Belmont. He also learned a lesson from Funny Cide’s blazing — probably too fast — final pre-Belmont workout. So over the weekend, Tagg restrained Tiz the Law to a relaxing breeze.

Perhaps that’s also a product of the two horses’ differences in personality. Tagg said: “‘Tiz’ is more malleable. Funny Cide was all run. You couldn’t hold him.”

Knowlton recalls Tagg’s assistant trainer, Robin Smullen, being the only one who could handle the stubborn Funny Cide. Now, jockey Manny Franco can maneuver Tiz the Law all over the track with ease.

“He’s a different horse altogether,” Knowlton said. “He’s a much lower key, very easy to handle, does anything you want him to do.”

That was on display in the Florida Derby when Franco guided Tiz the Law from a perfect stalking position to a thunderous run past other horses down the stretch. Franco said Tiz the Law “makes my work a lot easier.”

“The Florida Derby, he was much more receptive to the jockey coaxing him back off of the early leaders, which makes him more effective and he certainly was,” said Bailey, who has won the Belmont twice. “It was just a picture-perfect trip.”

Tiz the Law would be the first New York-bred colt to win the Belmont since Forrester in 1882. It would also complete Tagg’s personal Triple Crown, which Knowlton hopes would get the veteran trainer some Hall of Fame consideration.

That would certainly be true if Tiz the Law dominates the Belmont and possibly the Travers Stakes at Saratoga in early August, then moves forward to run for the roses at Churchill Downs.

Following the organic 2003 tradition when late co-owner Dave Mann rented a school bus to go from the hotel to the track, Tiz the Law’s Sackatoga Stable owners might again be riding high the first Saturday in September.

“Everybody expects that if we can get back to the Derby, we’ll be in the school bus,” Knolwton quipped, “and maybe two because of social distancing.”

They never figured to be warming up the bus again a generation later. But after buying Tiz the Law for $110,000 at the same upstate New York yearling sale they got Funny Cide, it’s another Triple Crown ride worth getting excited about.

“I figure once in a lifetime for an outfit like ours,” Knowlton said. “To have it happen again, still I wake up and kind of pinch myself and say, ‘You know what, it looks like lightning really has struck twice.’”