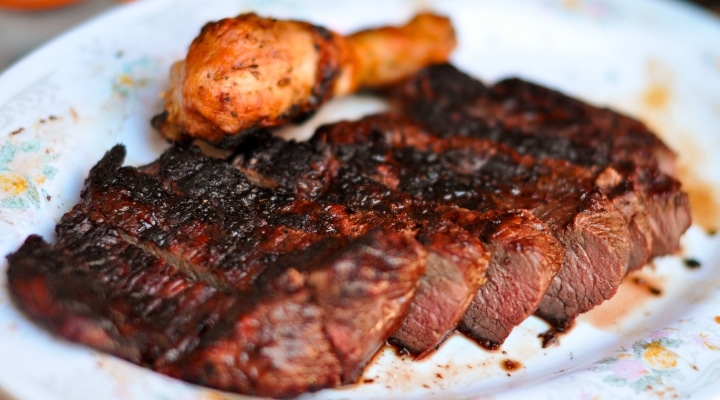 The COVID-19 outbreak has disrupted supply chains and sickened many workers in meat-processing plants across the country, resulting in a reduced selection in grocery store meat cases. Consumers living in or near rural areas instead may look to local farms that raise meat-producing animals. (photo by James, Creative Commons/flickr.com)

UNIVERSITY PARK, Pa. — The COVID-19 outbreak has disrupted supply chains and sickened many workers in meat-processing plants across the country, resulting in a reduced selection in grocery store meat cases. Consumers living in or near rural areas instead may look to local farms that raise meat-producing animals.

“Many areas of Pennsylvania are blessed with local butcher shops that sell locally produced meats or that can process animals raised on local farms,” said Melanie Barkley, Penn State Extension educator based in Bedford County. “There are several different ways consumers can connect with local producers to purchase locally raised meat for their family.”

The easiest way is to visit a local butcher shop. If it does not have what you are looking for, Barkly advises, the folks who work there may be able to suggest local livestock producers who have meat animals for sale. Another option would be to check out Penn State Extension’s AgMap website, which features a searchable database of agricultural businesses such as producers and processors, at https://agmap.psu.edu/.

In addition to selling individual cuts of meat, local butcher shops offer larger quantities of meats for sale. These larger quantities normally come as a half or quarter of beef, and for smaller animals such as hogs and lambs, the shops may offer a whole animal or half of an animal for sale.

There are livestock producers located in almost every county in Pennsylvania. Barkley noted. “While not all of them may have animals available right now, you certainly can put your name on a list to purchase animals when they do become available,” she said. “This may mean a waiting time of several weeks to several months, depending on the processor’s schedule.”

Producers who sell beef generally offer it by quarters, halves or by the whole animal, she explained. Rather than make you choose between a front and rear quarter, some producers sell half of a half, so a consumer gets cuts from both the front and rear quarters of the animal. A typical beef carcass will weigh 600 pounds, so each side would weigh 300 pounds, and half of a half would weigh 150 pounds.

But not all that weight will be packed into a consumer’s freezer. According to the American Meat Institute, the average half of beef that weighs 300 pounds will produce about 218 pounds of meat. Broken down into the major types of cuts, it would include approximately 81 pounds of roasts, 60 pounds of steaks, 34 pounds of ground beef, 20 pounds of stew meat and 23 pounds of miscellaneous cuts.

The typical pork carcass will weigh 180 pounds, Barkley pointed out, and producers sell mostly by the whole carcass or by the half. What a consumer will bring home is about 116 pounds of meat, according to the Food Safety Division of Meat Inspection Services in Oklahoma.

“So, if you are looking for meat to buy for your family, consider purchasing that meat from a local processor or from livestock producers in your area,” said Barkley. For more information on purchasing locally produced meat, contact your local Penn State Extension office.