Home » Timing is everything for weed management 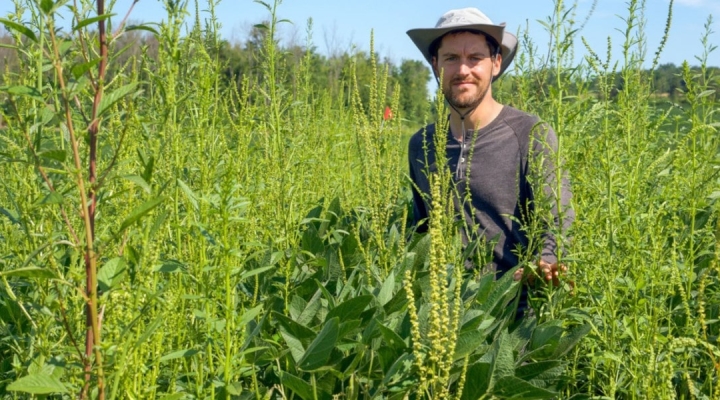 ITHACA, N.Y. — Farmers can tailor their efforts to control weeds more effectively by pinpointing when a particular weed will emerge, according to a new Cornell study.

Researchers in the College of Agriculture and Life Sciences reviewed past studies on the peak timing of emergence for 15 troublesome weed species in the Northeast, as well as potential ways to use this knowledge, in their study, “Improving Weed Management Based on the Timing of Emergence Peaks: A Case Study of Problematic Weeds in Northeast USA,” published June 21 in the journal Frontiers in Agronomy.

“There are lot of different weed management tactics out there, and most of them can be improved with some consideration of what weed species you have and when they emerge,” said lead author Bryan Brown, integrated weed management specialist for New York State Integrated Pest Management and adjunct assistant Professor in the School of Integrative Plant Science’s Horticulture Section, in the College of Agriculture and Life Sciences. “In this paper, we provided a framework starting with those tactics that are easiest to tailor or adjust – all the way up to revamping a cropping system – based on avoidance of certain weed species.”

As an example, Brown pointed to common ragweed. “We found that in most of the literature, common ragweed had finished up its emergence by June 1,” he said. “So, if you’re able to wait to till and plant your field until after June 1, then you’ve effectively avoided common ragweed for the season.” Conversely, if a field is riddled with mid or late-season weeds, planting earlier can help give crops a head start to outcompete them.

When it comes to controlling weed seedlings using herbicides or shallow tilling, control is most effective soon after weeds emerge, so knowing when different weed species grow can help farmers plan ahead.

Farms with flexible crop rotations can leave the ground bare, or perhaps cover cropped, during the period when their most problematic weed emerges. By controlling that species, they essentially remove its weed seeds from the soil so it will be less of a problem in the future.

The researchers found that the timing of weed emergence varied among previous studies due to factors such as weather, soil temperature and moisture.

“Naturally, that’s going to vary from year to year and from study to study,” Brown said. “But the big surprise to me was that among previous studies that modeled weed emergence, when we input identical weather data weather data, there was still variation in when they expected weeds to emerge. That highlights the regional differences in soils and weed genetics.”

As the models improve by incorporating regional differences, the researchers hope work with the Network for Environment and Weather Applications to give farmers direct access to weather-based weed emergence predictions.

“As weed management becomes more challenging, I think that this type of planning is going to become more important,” Brown said. “Hopefully, as those emergence models become more accurate we’ll be able to use these tactics to even better use and really fine-tune the timing of our weed management.”

This work was partially supported by a joint research and extension grant the Cornell University Agricultural Experiment Station and Cornell Cooperative Extension received from the U.S. Department of Agriculture’s National Institute for Food and Agriculture.

Jim Catalano is a freelance writer for the College of Agriculture and Life Sciences.