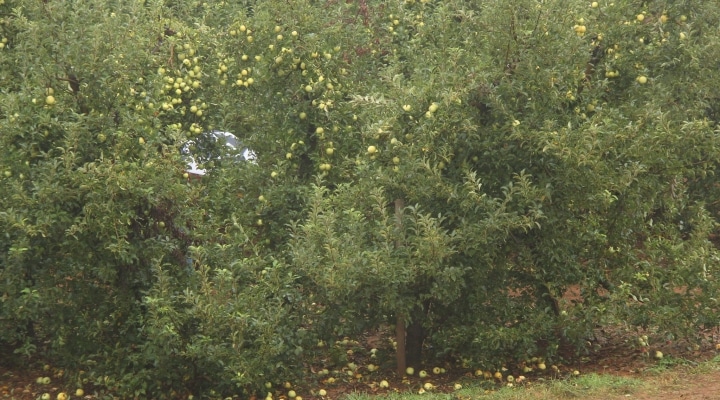 Apple-picking season is in full gear, and despite near-drought conditions that persisted throughout summer, Virginia growers are reporting their harvests are among the best they’ve seen in recent years. (photo by Eli Christman, creative commons/flickr.com)

SYRIA, Va. — Apple-picking season is in full gear, and despite near-drought conditions that persisted throughout summer, Virginia growers are reporting their harvests are among the best they’ve seen in recent years.

“We’ve actually had one of the best crops we’ve had in a while,” said Lucky Graves, who runs a U-pick operation at Graves Mountain Farm & Lodges in Madison County. “The apples might’ve been smaller because some of the trees were a little more loaded than they usually are, but overall it’s been a great season.”

Graves, who produces 10 or more varieties of apples each year, noted his crop benefitted greatly from late-summer rain that arrived after an extended dry spell. According to weather statistics recorded by the National Agricultural Statistics Service, northern and western areas of Virginia have seen below-average rainfall totals this year.

“We got really dry in summer, and we worried about that a little,” Graves added. “But we got those late rains to help our apples along, and everything’s seemed to work out pretty good in the end.”

Joe Snapp, who grows 16 varieties of apples at West Oaks Farm and Market in Winchester, also attributed the quality of his crop to well-timed rain.

“The rain in the latter part of the summer going into fall really helped size the fruit,” said Snapp, chairman of the Virginia Farm Bureau Federation Apple Advisory Committee. “We’re also glad to see these warmer temperatures in fall, which will help us with our harvests.”

Snapp said his Granny Smith, Fuji, Pink Lady and York varieties were still being harvested, and he expected the season to conclude by the first week of November.

Frederick County grower Dudley Rinker also shared that he had an exceptional year, having closed his U-pick operation for the year in early October.

Rinker, who also serves on the VFBF Apple Advisory Committee, noted farm-fresh apples still can be easily found across Virginia. And, to the delight of baking aficionados, Rinker reported the state’s fall varieties should be “in good shape” for the remainder of the season.