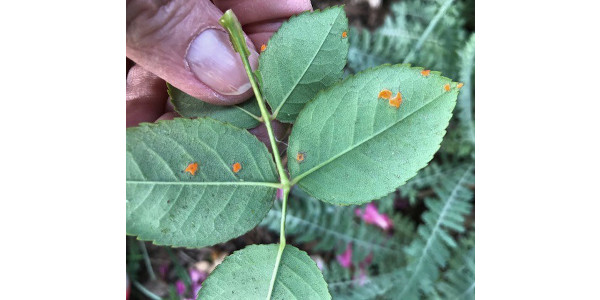 FORT COLLINS, Colo. — You’re probably familiar with rust – the kind like you see here on the grass clippers (right) that were left outside all winter! Plants get rust too, (although not for the same reason as the clippers) and it is appearing on landscape plants now.

Here’s rust on my Zephirine Drouhin rose (featured photo). I just had to have this plant with the beautiful, fragrant, pink flowers, few thorns and intriguing name. Since Zephrine is a climber, I planted it next to a 4 foot picket fence, imagining how the canes would spread along its length. This antique rose is classified as a “Bourbon” rose and dates from 1868. In spite of all the positives, it has poor rust resistance.

Rust is a fungal disease that overwinters on fallen leaf debris and canes. It infects susceptible roses in moist mild weather when the pustules (that form on leaf undersides and canes) release their spores. The disease is tough to control once the symptoms develop. And since you can clearly see the orange pustules as well as yellow spots on the upper leaf surfaces – it is obviously well underway.

Fortunately, it is primarily an aesthetic problem in our climate. Cultural strategies can help manage it – proper siting, keeping the canopy thinned to promote rapid leaf drying and sanitation (removal of diseased leaves and canes.)

While I’ve had moderate success with the cultural strategies I recently learned about a situation in my neighbor’s yard that might be sabotaging my efforts. For some reason, their sprinkler system ran one weekend day when I happened to be looking out a window. One sprinkler head directly targeted poor Zephrine, along with the lawn. I think a conversation and a sprinkler adjustment will help improve the leaf drying situation!

Here’s a photo of rust on hawthorn (left). I’m not sure which rust this is, but regardless, the rusts that appear on hawthorn (and related species) are more complex than the one on rose.
These rusts have a two- host life cycle, which starts with the maturation of fungal structures on a juniper host. The spores produced by them in the spring blow to alternate hosts, which includes hawthorn, crabapple, apple and others. Years with mild, humid spring weather will produce a large amount of infections.

Symptoms appear as yellow-orange spots on leaf surfaces – as soon as flowering is over. Fruiting structures that look like small tentacles develop on the undersides of the spots. When mature, they produce spores that blow to juniper hosts and cause infection. The rust fungus must have both hosts to complete its life cycle. Under the right conditions, the two hosts can be a mile or more apart and still be infected!
Generally, these rust diseases are most obvious on the deciduous hosts because of the colorful spots and premature defoliation of infected leaves. The best way to manage the disease is to select plant species that have rust resistance. You can also remove one of the alternate host plants – three hundred yards up to 3 miles is the standard recommendation. In a landscape setting this is usually impossible. Generally, the disease is more of an aesthetic than plant health problem in our area.

Finally, here’s a rust I found on a weedy mallow hiding between a raised bed and fence. It’s the same rust that infects hollyhocks as they are closely related. Unfortunately it’s not a health issue for the mallow (rats!), but the disease can prematurely defoliate hollyhocks and make them look just plain ugly later in the season. The fungus overwinters on dead leaf and stem tissue of mallow and hollyhock, so sanitation goes a long way to reduce the inoculum for next year. Guess I better get my weed knife out and get rid of this guy.