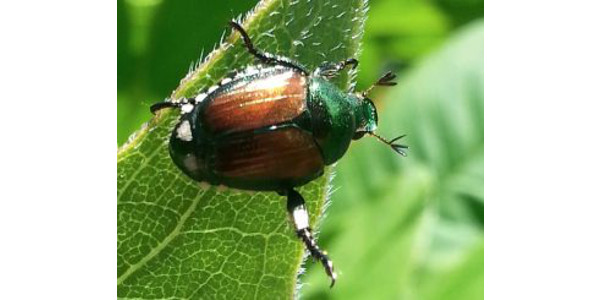 The beetles are just over a quarter of an inch long. The back side of the body, the wing covers or elytra are a shiny brownish coppery color, the rest of the body is green, but on the sides of the body there’s a series of tiny white dots that you can see pretty well. (Photo Credit: PJ Liesch, UW-Madison Entomology)

PJ Liesch: So at this point, we’re just starting to see the Japanese Beetle emerge. And typically in Wisconsin it’s right around the 4th of July give or take a week or two is when they start coming out in force. And the adults can be fairly long-lived and they might live a month or two at a time. So typically, July and August are very important months for Japanese Beetle and as we get on into September, by mid-September they start to quiet down for the year.

Lorre Kolb: What are signs that people may have Japanese Beetles in their yards.

PJ Liesch: So the beetles themselves are just over a quarter of an inch long. The back side of the body, the wing covers or elytra are a shiny brownish coppery color, the rest of the body is green, but on the sides of the body there’s a series of tiny white dots that you can see pretty well. And if you’ve bumped into Japanese Beetles before, you probably recognize them because they can cause very significant damage to plants. Often what they do is chew holes and they tend to nibble around the tougher veins, so we get this lace-like skeleton of a leaf that’s left behind and we actually refer to that as skeletonization. And that’s a very characteristic type of damage that this insect causes to plants.

Lorre Kolb: And what can people do about Japanese Beetles?

PJ Liesch: It really depends on the type of plant you’re trying to protect. Now if you’re in a small yard or don’t have that many plants that are being affected by this insect, if you have an opportunity to go out once a day and simply knock the beetles off or spray them with a mixture of soapy water, or knock them into a bucket of soapy water that might be enough to prevent the bulk of the damage. If you don’t have that much time or you have a lot of plants, there are some sprays you can get at the hardware store or garden center that can be used to protect plants. If you have larger trees that can get fed on, things like Birch trees for example we do have some systemic soil treatments you would have to apply a couple weeks before the beetles become active, typically in about early to mid-June. Those have to get taken by the roots to get up to the leaves to protect the plants. But we do have those options in a situation where we might have larger trees that need protecton.

PJ Liesch: The feeding preferences of Japanese Beetles have been pretty well studied. And it turns out they’ll feed on over 300 different types of plants. They do strongly prefer certain plants over others. Some of the commonest landscape plants and garden plants would be things like rose bushes, linden and birch trees, grape vines can really get clobbered by Japanese Beetles.

Lorre Kolb: If you’ve had Japanese Beetles in the past, is it just assumed you’ll have them again in your yard this year as well?

PJ Liesch: In a lot of cases yes, we do see some fluctuation from year to year. It would really surprise me if they disappeared from your yard entirely.