Subscribe
Home / Just Me, Kate / Time for a Nap 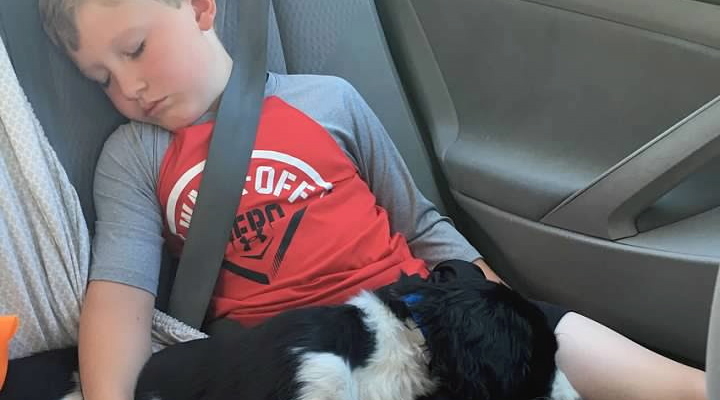 Maybe it was the crisp, clothesline-dried sheets.

Or the darkness of the room with the shades pulled low on a chilly fall afternoon.

It could have been the faint smell of grilled cheese that lingered on my little fingers as I nestled down in and under the warm covers.

Whatever it was, there are those little triggers that sneak up on me every now and then that make me remember. And on those afternoons when I yawn and consider the ramifications of curling up and taking a nap, I go back to nap time at Aunt Betsy’s…many years ago.

We knew the nap was looming as we ate our tomato soup loaded with ritz crackers.  As kids ranging in ages from 6 through 9 a nap was not something that we embraced readily, so we fought it with every ounce of our being. Why would we want to disrupt all of the fun that had been going on out in the brook that ran between the house and the barn?

In the mornings there were leaves to clear, rocks to move, splashes to be had.  We worked hard, like it was our job trying to make it up to the culvert that ran under the road clearing the leaves and sticks as we went.

From the stream we could see all the goings on at the farm; tractor movement, cow feeding. We could watch the big old Holstein cow that had been turned out for the day, wander around the outside of the barn, nibbling and nuzzling to find some green grass in the late fall sunshine. My uncle’s hope was to get her on the mend with fresh air and grass under her feet.

We could hear my Aunt Betsy holler from the kitchen window, and we knew it was time to go. There was no pushing for more time to play when she called. We knew better. And usually by then, I was feeling wet in my boots and soggy around my shirt cuffs. Starting to feel a little chilled, I usually welcomed the break in action for lunch…

But I knew, it was coming, and it would be a miracle if for some reason we got out of the afternoon without having to take the dreaded N-word… Nap!

I remember sitting at the oblong squarish, maple table, my feet barely grazing the floor beneath me. There we would sit in front of the picture window that looked out over the front lawn and down the road toward the red barns.  The grilled cheese was cooked just perfect with lightly toasted Wonder bread and 2 slices of melted American cheese. It paired well with our tomato soup.

Uncle Pete would come through the breezeway door carrying a fresh jug of milk in the brushed stainless can with the snug-fitting cover. He would shake it and ask us all if we wanted chocolate milk as he reached for the hershey’s in the refrigerator. He already knew the answer, chocolate milk was his department, and we loved that.

Young and the Restless would be running in the background on the little color tv set that sat in the corner of the kitchen. The screen was no bigger than a minute.

There we would sit, me and my cousins Tom and Jess–making sure to behave ourselves so that we could quietly sneak out of the kitchen unnoticed before getting sent off for quiet time. If we were good maybe Aunt Betsy would see that we weren’t tired… oh how we tried so hard to avoid it.

To the sink we would go, placing our lunch dishes on the white with gold flecked formica countertop. My aunt would give each of our faces and hands a good wipe and to the bedrooms we were sent.

I always got placed in my aunt and uncle’s room. I did love the white percale sheets that had the little red, yellow and light green flowers.  They were always crisp and smelled of the outdoors. My aunt was always hanging sheets out on the clothesline behind the house.  She would go out first thing in the morning, before the dew was even off the grass, in her nightgown and robe. I can still hear the field sparrows clucking in the sumac that hugged the old railroad tracks.  But I digress…

Jessie would go to her room, sighing and dying the whole way and Tom would just argue in the hallway by the kitchen, hands on his hips. Two years my junior, he never backed down. But not me, I would just quietly go, I wasn’t going to argue, that’s what I had my cousins for.  🙂

Sometimes Jess would sneak down to the end of the hall and peak her head in for a minute just to see if I was asleep yet. I think that she liked the thrill of trying not to get caught…

I nestled in.  And as much as I hated it, I remember how it felt so safe, so regular, so simple.

My eyelids got heavy…. and before I knew it they were opening up again to the sound of movement in the kitchen… and it was over.  And I was off like lightning to see if the others were awake yet… maybe a devil dog for snack?

After all these years, when I think of a nap, I think of Aunt Betsy’s house. I think of those sheets, and those long, fun-filled days, when time stood still.

I grew up so happy, how did I become so lucky to land in the world where I did?

I was very blessed…despite the nap.  Boy, I wish someone would force me to take a nap now.  😉