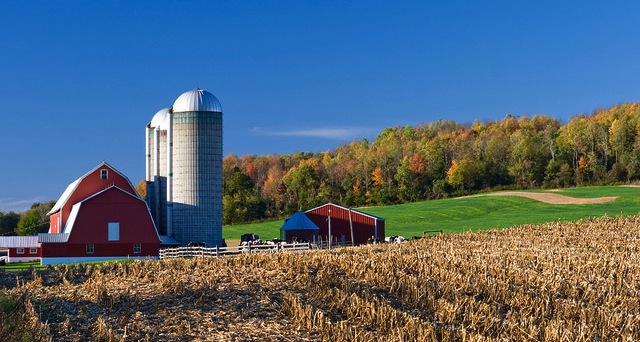 Vermont's dairy farms, which produce about 65 percent of the milk consumed in New England, rely on immigrant labor. Most of the workers do not have legal status to be in the United States. (U.S. Department of Agriculture, Flickr/Creative Commons)

MONTPELIER (AP) — Vermont officials, including the three members of the state’s congressional delegation, said Monday they are asking federal authorities to clarify their immigration priorities following the arrests last week of three advocates for farmworkers.

A spokesman for Republican Gov. Phil Scott said officials are working through the state’s congressional delegation to learn more about the arrests.

“Instead of focusing on removing those people who pose a threat to public safety or national security, the Trump Administration is targeting all undocumented persons, including the people that help keep our dairy farms and rural economy afloat,” the statement said.

Will Lambek, a member of the Migrant Justice advocacy group, speculated the three arrested were targeted because of their activities on behalf of farmworkers. They also are members of the group.

“What they did is legally permissible,” state Attorney General T.J. Donovan said. “That needs to be acknowledged in this debate.”

He said one of the three served on a panel he led that helped write a guide for Vermont towns about immigration enforcement. If such arrests continue, they could impact the state’s agricultural economy, Donovan said.

Jose Enrique Balcazar Sanchez, 24, was arrested Friday on immigration charges along with Zully Victoria Palacios Rodriguez, 23, of Peru, shortly after they left the Migrant Justice office in Burlington, Lambek said. Neither has a criminal record.

And on Wednesday, Cesar Alexis Carrillo Sanchez, 23, of Mexico, was taken into custody when he arrived at the Chittenden County courthouse to face a drunken-driving charge, which state prosecutors dismissed. ICE said Carillo acknowledged entering the country illegally and is facing deportation.

The three are being held at a jail in New Hampshire. Their arrests sparked a Saturday rally in Burlington attended by about 200. Another rally was scheduled for Tuesday at the Vermont Statehouse in Montpelier.

Boston immigration attorney Matt Cameron, who represents Balcazar and Palacios, said the civil charges against his clients could lead to their deportation. Nevertheless, he expects them to be released on bail, possibly as early as next week.

Vermont’s dairy farms, which produce about 65 percent of the milk consumed in New England, rely on immigrant labor. Most of the workers do not have legal status to be in the United States. State Agriculture Secretary Anson Tebbetts has been looking for ways to help the dairy industry if there are large-scale arrests of farmworkers.

Balcazar has been outspoken in his support for Vermont’s immigrant farmworker community. He worked on Donovan’s panel that helped produce the immigration guide.

“At the same time I want to acknowledge that the federal government has the authority to do this,” Donovan said.

Weed control starts with the seeds