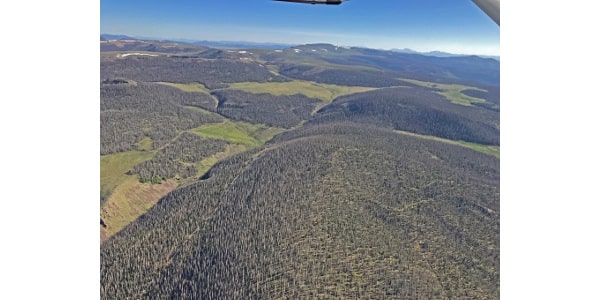 LAKEWOOD, Colo. — Forest managers are working together to address continued outbreaks of insects and disease on Colorado’s forests, including spruce beetle, which remains the most damaging forest pest in the state for the eighth consecutive year, based on a 2019 aerial detection survey led by the USDA Forest Service, Rocky Mountain Region, and Colorado State Forest Service.

Every year, the agencies aerially monitor forest health conditions on millions of forested acres across the state. Today, the agencies released the results of last year’s aerial survey and survey map.

In 2019, spruce beetle affected 89,000 acres of high-elevation Engelmann spruce across Colorado. Although the number of acres affected by this beetle declined for the fifth year in a row, it continues to expand its footprint by spreading to previously unaffected areas. Last year, it affected 25,000 new acres of forest.

Primary areas impacted by spruce beetle include forestlands in and around Rocky Mountain National Park and portions of the San Juan Mountains, West Elk Mountains and Sawatch Range.

Since 2000, spruce beetle outbreaks caused tree mortality on roughly 1.87 million acres in Colorado, and about 41 percent of the spruce-fir forests in the state have now been affected. Blowdown events in Engelmann spruce stands, combined with long-term drought stress, warmer temperatures and extensive amounts of older, densely growing trees, contributed to this ongoing epidemic.

Roundheaded pine beetle, along with associated native bark beetles, continued to affect ponderosa pine forests in Dolores County in southwest Colorado. This insect affected 22,000 acres in 2019. While this is a slight decline from 2018, when 26,900 acres were affected, record-low precipitation levels in 2018 in this part of the state have weakened tree defenses, providing an environmental window that continues to favor an increase in beetle populations in southwest Colorado.

From Dry and Hot to Wet and Mild

The amount of precipitation and daily temperature patterns affect how well trees in the state’s forests can ward off pests to remain healthy and resilient. Colorado experienced near-average temperatures from October 2018 to September 2019. During that same period, precipitation levels rebounded from the prior year, which was the second driest on record since 1895, according to the National Oceanic and Atmospheric Administration.

This was good for Colorado’s trees impacted by bark beetles. Adequate precipitation in 2019 bolstered their defenses by helping trees produce enough sap to resist insects attempting to enter through the bark. However, this precipitation, coupled with mild temperatures, caused heavy snowpack to persist later than usual, delaying tree symptoms from insect attacks. This made aerial detections difficult, which may explain the decline in acres affected by spruce beetle.

Wet spring conditions in 2019 also created favorable conditions for several species of leaf fungi, which can cause early leaf drop and spotting on leaves of cottonwood, aspen and poplar trees. Defoliating insects may also cause damage. Surveyors detected disturbance on 73,600 acres of aspens in 2019, although these insects and diseases rarely cause significant tree decline unless trees are severely defoliated over multiple years.

The aerial survey also revealed that western spruce budworm continues to be Colorado’s most damaging and widespread forest defoliator. The insect affected 147,000 acres of Douglas-fir and spruce trees in 2019, mostly in central and southern areas of the state. This is up from the 131,000 acres impacted by the western spruce budworm in 2018. Defoliation that occurs over several years may weaken a tree to the point where bark beetles can easily overcome the tree and kill it.

In addition, the aerial survey showed the effects on forests from other insects. Douglas-fir beetle affected numerous pockets of forestland covering 7,400 acres, down from 14,000 acres in 2018, and the mountain pine beetle affected only 720 acres statewide. While it remains at natural, endemic levels, the aerial survey found a slight uptick in mountain pine beetle activity in the Taylor River drainage in Gunnison County.

“Colorado’s forests are vital to the economic and ecological health of our state,” said Mike Lester, state forester and director of the Colorado State Forest Service. “Our partnership with the U.S. Forest Service on the aerial survey offers another great example of how working together, we can effectively address forest health issues that span property boundaries, like bark beetle outbreaks. With information from the survey, we better understand the health of our forests and can focus our efforts where they’ll make the biggest impact.”

The aerial survey exemplifies the agencies’ continued support for shared stewardship and the recently signed Memorandum of Understanding, which establishes a framework for federal and state agencies to collaborate better, focus on accomplishing mutual goals and respond to ecological, natural resource and recreational challenges and concerns for our 24.4 million acres of forestlands in Colorado.

This past year for the aerial survey, pilots use a tailored, web-based application that allows the USDA Forest Service to share data during flights in real time with partners and the public. By capitalizing on this technology, the agency can proactively and quickly respond to outbreaks that surveyors detect on forestlands, share data more collaboratively and cover more area efficiently.

For more information on the insects and diseases of Colorado’s forests, and support for landowners seeking to achieve healthier forests, contact your local CSFS field office or visit csfs.colostate.edu.