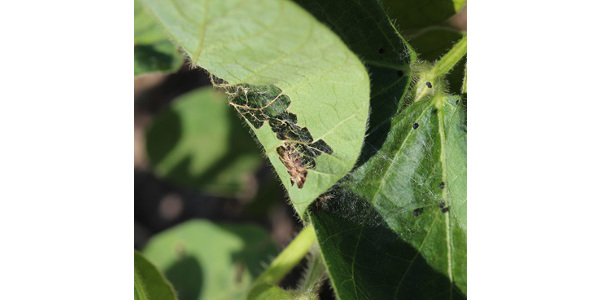 Figure 1. Rolled soybean leaves that are defoliated. (Credit: A. Varenhorst)

BROOKINGS, S.D. — During soybean scouting last week I noticed several fields that exhibited symptoms consisting of rolled leaves that were heavily defoliated and bound together by webbing (Figure 1). Upon inspection of the rolled leaves, I was able to find the culprit: thistle caterpillars (Figure 2). Thistle caterpillars are the immature stage of the Painted Lady butterfly (Figure 3) and are generally not present in large enough populations to cause concern. However, it is possible that these caterpillars may cause enough defoliation to warrant management.

Profile & Behavior
Thistle caterpillars get their name because of the spines that are present on their body, giving them a prickly appearance. Thistle caterpillars can vary in color from brown to black, but will have yellow lines that run down each of their sides. These caterpillars produce a webbing that is used to pull leaves together near the site where they are feeding. These “rolled” leaves will often have large holes present along with concentrated areas of frass (waste).

To scout for thistle caterpillars, 10 random soybean plants should be scouted and the process repeated for five areas within a field. For each of the selected plants, evaluate the amount of defoliation that is present and record the growth stage of the soybean. During the vegetative stages soybean are capable of withstanding as much as 35% defoliation. However, once they reach the flowering and pod-filling stages, they become less tolerant of defoliation. The defoliation threshold for these growth stages is 20%. If defoliation exceeds 35% during vegetative stages or 20% during reproductive stages, soybean yields will be reduced by 3-7% (Figure 4). For a list of foliar insecticides that are labeled for thistle caterpillar management please refer to the current edition of the South Dakota Pest Management Guide: Soybean.