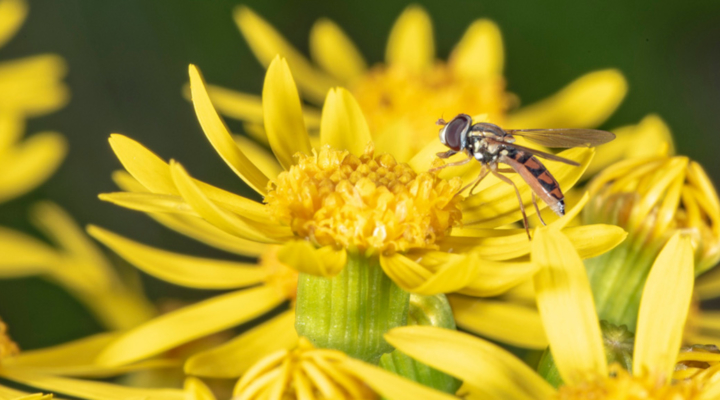 Hover flies (aka syrphid flies) are prevalent this time of year, as they have been in previous years, and they are particularly numerous around corn and soybean fields. (J. Obermeyer, Purdue University)

COLUMBIA CITY, Ind. — Hover flies (aka syrphid flies) are prevalent this time of year, as they have been in previous years, and they are particularly numerous around corn and soybean fields. But don’t fear, they can’t sting. It is a fly that looks and acts like a bee.

Purdue entomologist, Tim Gibb, described hover flies. “Hover flies often swarm around people and even land on them, presumably looking for moisture and salts on our skin.”

Hover flies are aptly named because they can hover around people. They mimic the look and behavior of bees, and by doing so they scare some people who confuse them with either sweat bees or yellow jackets. But, they are a harmless fly.

Gibb said sweat bees often have a metallic colored head and thorax. Yellow jackets are usually larger than hover flies and have a distinct yellow and black striped abdomen.

They also hover in the air and wiggle their abdomens up and down after they land, acting tough and making people think they are preparing to sting. But, they possess no body part with which they can inflict pain. They can’t even bite – they have what’s called a sponging/lapping mouthpart, the same as house flies and fruit flies.

Gibb highlighted key differences in behavior and appearance between hover flies and bees or wasps:

Gibb said that hover flies are beneficial because they help pollinate plants, and in their immature stage (larvae), they eat aphids that can be pests on many types of plants.

Hover flies can be a nuisance by their persistence and when present in large numbers. But, populations usually decline within a week or two.

One new thing that we have been learning is that hover flies in corn fields are evidently consuming leftover pollen. John Obermeyer, Purdue entomologist, recently said, “We found that there is actually preference by some species of hover flies to feed on corn pollen,” he said. “They are utilizing a protein source that would just normally go to waste.”

Obermeyer said these hover flies are the adult form of maggots that have been feeding on excess and old pollen in cornfields. They tend to feed in leaf axils and other areas where pollen collects. They are not pests, and are really only feeding on “surplus” pollen that does not land on silks and pollinate corn.

Find Gibb’s recent bulletin on hover flies at: http://extension.entm.purdue.edu/publications/HN-94.pdf. The publication has pictures of a hover fly, a sweat bee, and a yellow jacket so that you can compare and easily recognize each insect. Also access a recent article on hover flies (“Buzzing Swarms of Yellow and Black Flies Are Not A Stinging Threat”) by other Purdue Extension experts at: https://www.purduelandscapereport.org/.

Changes on the horizon for H-2A

'Crazy' beekeepers determined to make it in tough times
October 19, 2020