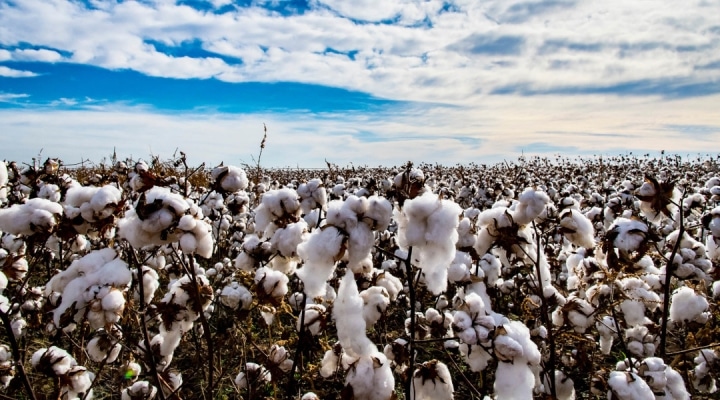 Whether summer crops like cotton can be fully harvested this year in the Panhandle and southwest Oklahoma will depend on whether or not the two regions receive more rain. (Photo by Todd Johnson, OSU Agricultural Communications Services)

STILLWATER, Okla. — Planting for summer crops is finishing up in the Panhandle and southwestern regions following some much-needed rain, but drought concerns still remain.

The last few weeks have produced Oklahoma’s most plentiful rains so far in 2022, but will the precipitation sustain long-thirsty soil on the western side of the state?

The latest Oklahoma Mesonet rainfall totals show a clearing of drought conditions for most areas of the state, with the rain accrued on the western side of the state being enough to change the southwestern region’s status from extreme drought to abnormally dry to moderate drought status. The Panhandle still remains in a status of severe to exceptional drought. High winds and heat have been added into the drought mix in recent days, and more high temperatures are expected.

For producers on the western side of the state, there is only one thing to do in their current climate – pray for more rain.

“Recent rains have helped with replenishing the soil moisture profile, and the planting of dryland crops has picked up, but we will need more consistent rains during the growing season to sustain these dryland crops,” said Sumit Sharma, Oklahoma State University assistant Extension specialist for irrigation management. “However, some areas in the Panhandle have experienced damage to established crops due to last week’s hailstorm and high-speed winds. These areas might get replanted or claimed for insurance.”

Sharma said milo (grain sorghum) is the major dryland crop in the Panhandle this summer, and despite its high sensitivity to drought, corn is likely to still be a prominent irrigated crop because of its high yield potential per unit of water applied. Cotton could be a little more delicate because it needs to be planted sooner rather than later to accumulate the required number of growing days at an ideal temperature for crop maturity.

“I think the caution producers are taking right now is in establishing a crop they can sustain,” Sharma said.

According to Seth Byrd, state Extension specialist for cotton, the recent rains were enough to fuel germination in dryland crops, but more is needed. Even irrigated crops need rain to supplement their full water needs.

Byrd said the southwest region is in a different situation now because of the rain with some areas of the southwest receiving 4-6 inches of rain in one day during recent rain events. But in some areas of the state, cooler temperatures came with the rains, and the combination of moisture and cooler temperatures can cause seedling diseases. Byrd said disease is not widespread nor does he believe it will be, but it is there, and it is something for which producers should be mindful.

The other problem that arises with the rain is planting cotton several days late, Byrd said.

“In Oklahoma, most of our cotton is dryland, but the planting window for dryland usually starts the end of May and runs through the first two weeks of June,” Byrd said.

With starting dryland cotton planting in the second week of June, producers have been in a time crunch to get all of the crop planted within the usual timeframe, but cotton planting is now at 62% acres planted, according to the U.S. Department of Agriculture’s Oklahoma Crop Progress and Condition Report.

With the ongoing impact of drought, many southwest producers delayed planting as late as they could for summer crops, which could push back harvest.

“In the case of sorghum, it will put the crop growing through a more heat stress time of year,” Strickland said. “However, I think we could see some more sorghum planted this year behind some of these failed wheat acres.”

With the recent rainfall, producers will hopefully be able to plant their cotton acres and move forward.

“While the recent rainfall is great and came in sufficient amounts to impact stored soil moisture to a degree, the impact of the drought is still lingering. We still need more rainfall to continue to replenish soil moisture,” Strickland said.

The other concern still facing southwest farmers is Lake Lugert, which supplies water to the Lugert-Altus Irrigation District.

“Right now, the lake is at about 25%, so being able to irrigate on irrigation district acres is currently not feasible,” Strickland said. “The bottom line is if they don’t release the lake water around here – currently, that is in question – producers will not be able to water all their irrigated acres. If these acres cannot be maintained with irrigation, producers will most likely be looking at insurance adjustments.”

Strickland said in this scenario, cotton yields will be greatly impacted in the state.

“If our rain chances don’t continue to improve – whether talking about cotton, sorghum, corn – there’s no question that our yield potentials are going to be reduced,” Strickland said. “We’re just hoping more rain will be part of our future weather forecasts. We take the science and stretch it out to a lot of things, but it basically boils down to rainfall cures a lot of ills.”

For more information on crop conditions and drought concerns, visit the following:

OSU Agriculture is dedicated to improving the quality of life of Oklahomans through science-based information and education. It is comprised of the Ferguson College of Agriculture and two state agencies: OSU Ag Research and OSU Extension.