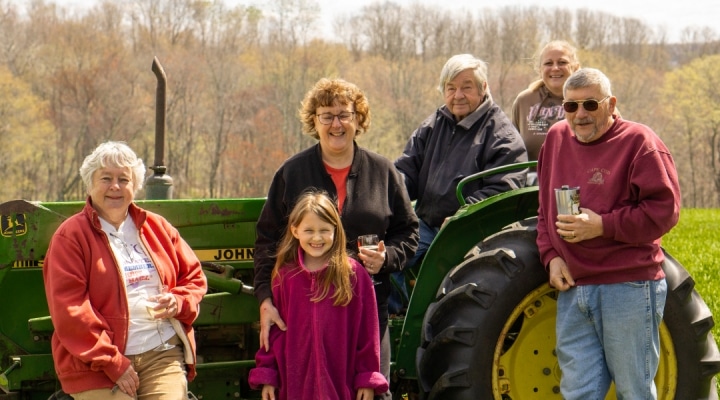 With CFT’s help, Prospect Farm is protected for the next generation, and generations of farmers to come.  (Courtesy Photo)

WOODSTOCK, Conn. — Connecticut Farmland Trust (CFT) announced that Prospect Farm in Woodstock has been preserved. The Chattelle family, who has managed the historic farm for over 40 years, generously donated an easement on its property. Now, the family farm is secure for future generations as part of Woodstock’s thriving agricultural fabric.

“To have the land preserved feels great,” said Loretta Chattelle, one of seven children of the original farmers Virginia and Normand Chattelle.

“We’re excited because this is the first farm CFT has preserved in 2021 and we’re incredibly thankful to the Chatelle family for their donation of the easement,” said CFT Executive Director Elisabeth Moore. “It’s a wonderful gift in their parents’ memory, to Woodstock in particular and the agricultural community as a whole.”

Prospect Farm is CFT’s sixty-second protected farm. It is the fifth farm protected in Windham County and the second in Woodstock. CFT has permanently preserved 4,758 acres of Connecticut farmland since its inception in 2002 and helped partners protect an additional 1,100 acres.

After her parents died, the siblings wanted to sell their land, but they wanted to make sure it would always remain a farm. “We know that this is what our parents would have wanted,” Loretta said.

Loretta and her siblings began to search for ways to ensure the property would be safe from development, but their small, independent farm didn’t qualify for preservation through other land trusts and state programs.

“We’re so glad we were able to preserve Prospect Farm,” said CFT Executive Director Elisabeth Moore. “Protecting smaller farms is a niche that CFT has chosen to focus on. We want to make sure farmland is available for all going forward, especially for the young, beginner farmers who are the future of agriculture in Connecticut.”

With the easement in place, Loretta’s niece Sarah Eichner was able to buy the farm. She will be returning to Prospect Farm as the third generation of her family on the land.

Prospect Farm is situated on beautiful land with sweeping views of the surrounding countryside, which made it a target for development. A local builder had approached Normand years ago with interest in buying the property.

“After my father passed [the developer] started asking around,” Loretta said. “We know he wanted the property, not because of what it is. He just wanted to put building lots on it. We’ve now stopped that. We know that he can’t ever get his hands on it. So, we’re all quite happy that the farm can’t be developed.”

“The Chattelles wanted to keep the farm in farming without having to own it,” said CFT Conservation Manager Kathleen Doherty. “They wanted to sell with the assurance their father’s wishes would be honored that the property would remain a farm.”

With CFT’s help, Prospect Farm is protected for the next generation, and generations of farmers to come.

“Prospect Farm is the perfect size for a beginner farmer,” said CFT Conservation Manager Kathleen Doherty. “The trend in Connecticut is beginner farmers want smaller acreage…They’re cultivating more intensive kinds of crops like vegetables that use less land but are integral to the local food system.”

Prospect Farm covers 13 acres on a hilltop in eastern Woodstock. Over the years, the Chatelles grew vegetables and raised pigs, chickens, turkeys, geese, and ducks on the property. They often had between five to ten cows at a time. At Thanksgiving, they provided dozens of farm-raised turkeys to the community.

The farm is currently a hay operation and part of Woodstock’s thriving agricultural base. “Woodstock has been an agricultural community since its founding,” said Dawn C. Adiletta, a CFT board member and 40-year resident of Woodstock who helped connect the Chattelles to CFT. “We have some of the best agricultural land in the state and it’s exciting to see more of it preserved forever.”

Sarah, the family member taking over the farm, will be on the land this summer. She is looking forward to carrying on her family’s legacy.

“It’s a beautiful piece of land, it’s a piece of Woodstock history, and a special place for my family,” she said. “Regardless of who owns the property, one thing my grandparents wanted was to make sure their farm was protected, so I absolutely agree with my family in this decision to carry on their traditions.”

Agricultural conservation easements prohibit residential and industrial development but allow commercial agriculture and construction of agricultural structures on designated areas of the land. Since its founding in 2002, CFT has protected over 62 family farms, covering over 4,758 acres. CFT is the only land trust in the state dedicated solely to the protection of agricultural land. CFT is a private, accredited 501(c)(3) nonprofit that relies on Connecticut residents to support its work. Learn more at CTFarmland.org.