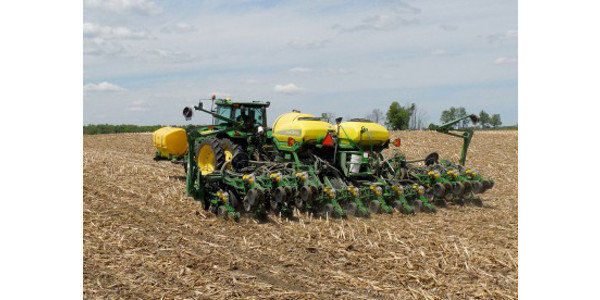 EAST LANSING, Mich. — Early or timely planting has been shown to be an important management practice for increasing soybean yields. The benefits of planting early are greater when planting into highly productive soils, planting in wide rows and when drought conditions occur after planting.

There are several reasons why early planting contributes to higher yields. Early planting typically produces more nodes on the main stem, increasing the potential for more pods and ultimately more seeds per plant. Early-planted soybeans also build a larger crop canopy before entering the reproductive period than later-planted soybeans. The larger canopy captures more of the available sunlight and reduces soil moisture losses due to evaporation by shading the soil surface.

Soils are more likely to be too wet rather than too dry when planting early. Planting when the soil is too wet can easily negate the benefits of planting early and should be avoided if possible. Sidewall compaction and open seed furrows are the two most common conditions that result from planting when the soil is too wet. Dry weather following planting increases the adverse effects of both of these conditions.

Due to the high probability that early-planted seed will be confronted with cool and wet soils, Michigan State University Extension recommends using fungicide seed treatments when planting early. Select fungicides that are effective against fusarium, pythium, phytophthora and rhizoctonia.

Early planting can be beneficial as long as producers wait for suitable soil conditions, use fungicide seed treatments, plant high quality seed from later-maturing varieties and avoid planting when rain is imminent within 24 hours.